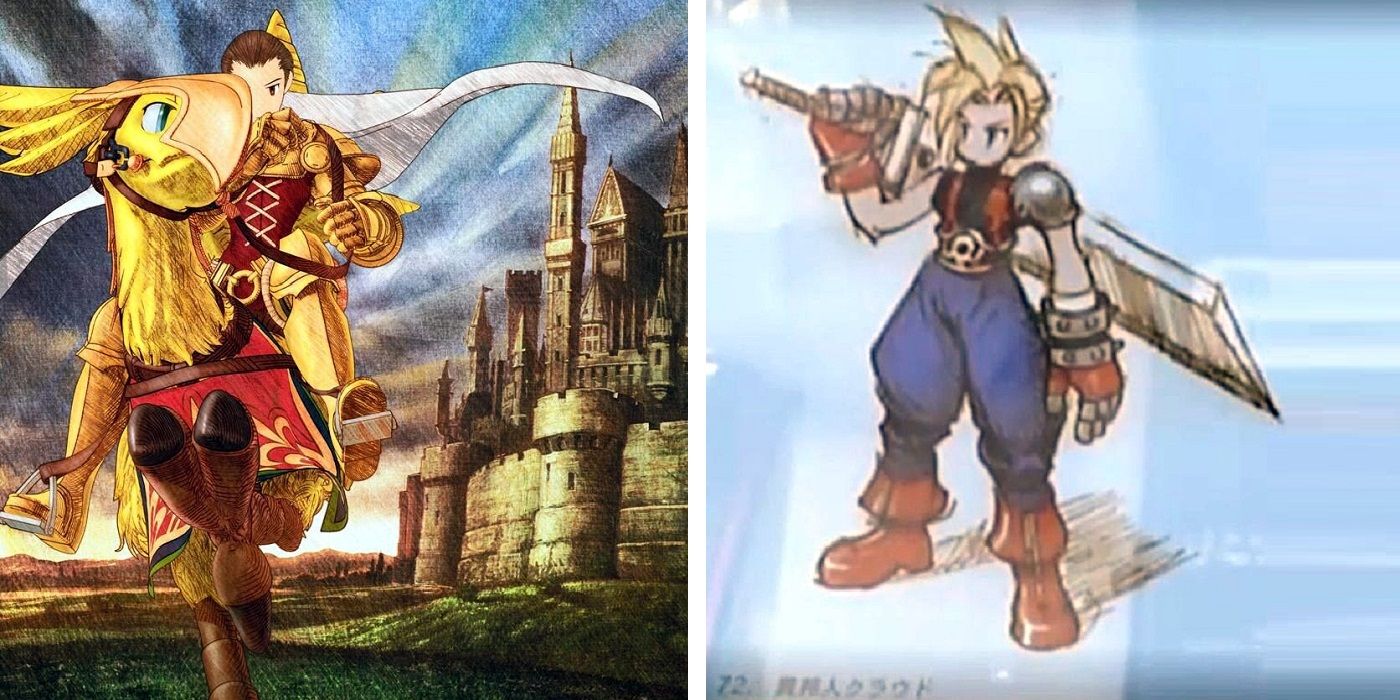 Final Fantasy Tactics came to North America in 1998, a year after the release of Final Fantasy VII in that region, and fans were hungry for anything Final Fantasy-related at that point. It was immediately well-loved by fans of the FF franchise as well as strategy games in general for its unique twist on both. Moving away from the traditional JRPG battle format to one where the characters can move around on a field in a turn-based strategy setup, Tactics allowed for different battle formations in each scenario and positions of the characters, which can change the strategy with which the player approaches the fight.

But being more than 20 years old means that the game’s graphics haven’t exactly held up, and with the concept art being so gorgeous, it’s easy to lament the way the game might have looked if it were made more recently using the same concept art as inspiration.

Lady Agrias Oaks is one of the most serious characters in the game, with a very specific sense of what her responsibilities are as the bodyguard for Princess Ovelia. Her expectations for how people should behave make her one of the most morally sound characters.

This piece of concept art, which sees her in an unusual moment of relaxation, also shows an often-unseen side of her character. She even has a smile on her face, which is somewhat unusual for her.

The most impressive thing in these pieces of promotional and concept art are the incredibly beautiful backgrounds. As more recent Final Fantasy games, particularly Final Fantasy XV, might show, modern animation and gaming technology has meant that games can be truly gorgeous, which is especially fun when characters can roam around in different settings.

But in Final Fantasy Tactics, the concept art, particularly in images like this one of Balthier and Ramza with the mountains in the background, couldn’t have been replicated with the PlayStation’s technological limitations. Though a game like Valkyria Chronicles shows that a FF Tactics game that actually looks like this art would certainly be possible now.

Some of the most exciting pieces of concept art for a video game are the ones showcasing the characters’ outfits. The concepts for them don’t always line up with what the character often ends up looking like, though they’re often pretty close.

In the case of this costume of Ramza’s, the look is pretty similar to the final costume he wears in the game. The problem is that his tiny pixelated body doesn’t really show all of the amazing details that the designer clearly took pains to add.

As Final Fantasy VII was newly released in Japan just a few months before Final Fantasy Tactics hit stores, and Square had spent a lot of money on the former and wanted to promote it as much as possible, it’s no surprise that a main character from FFVII made an appearance in Tactics as well.

He looks pretty similar to his character design in VII, which makes sense, since they’re pretty similarly designed. But his color scheme is a little bit different, with red and blue instead of his usual purple, though it’s again pretty hard to tell in his sprite form.

This portrait of Delita Heiral riding a Chocobo is another great example of what might have been possible if technology was just slightly more advanced at the time of the game’s production.

Since the characters are so small and difficult to see, it’s hard to enjoy all of the incredible details on the costumes of the characters, or even on the Chocobo’s face and body. And Delita is one of a few characters who changes costumes, so it’s even more disappointing to not get to see them in their glory.

5 Alma As A White Mage

Sometimes the roles of characters change in the course of the production of a game, with the story potentially needing a character around to do a specific thing or fill a role in the narrative.

RELATED: All Mainline Final Fantasy Games Ranked (According To Metacritic)

Alma is ultimately Ramza’s younger sister when the game is actually released, but before that was the plan for her, there was consideration for her to appear as a White Mage. The concept art for this character shows just how different she might have looked if they hadn’t changed plans for her.

So pieces of art like this, with Luso and Ramza taking a moment to rest beside a waterfall, does a lot to show what their relationship is like and how different their personalities are.

3 Ramza As A Squire

Though Ramza does end up being a Squire in the game, like his sister Alma, he does change how he looks a bit between the early character designs and what he ultimately looks like.

Where his final costume is rather colorful, with extra shades of blues, browns and tans, along with the symbol on the front of his shirt, his original design was a little more muted, with a dark blue shirt and dark brown pants and boots.

Rapha’s character art is pretty similar to how she ends up appearing in the game, though there are a couple of notable differences.

Some of these might be because of how hard it is to add details to the character in sprite form, when the characters are very small and incredibly pixelated. One of the big changes is that Rapha’s skin tone is noticeably darker in the original design than in her portrait in the game.

Reis Duelar’s character design is fairly similar to how she ends up looking in the game. But the little details about her appearance that get lost in the small portrait and sprite versions of the character are something of a disappointment, especially given that her facial expression and stance in her character art says so much about her.

Her sense of determination and devotion to Beowulf, as well as her loss of her memories as the Holy Dragon, are all wrapped up in her expression.

NEXT: 10 Of The Strongest Summons In Final Fantasy History, Ranked


Next
10 Heroes Whose True Identity Were Kept Secret From Readers

Liz Adler is a writer and editor based in San Diego, CA. She holds an MFA from San Diego State University and a Bachelor’s of Arts from Illinois State University. Her work has been featured at Loser City, HelloGiggles, and Women Write About Comics among others. In her free time, you can find her eating hummus, riding the Haunted Mansion, or being suffocated by her cats, Moo and Mai Tai.