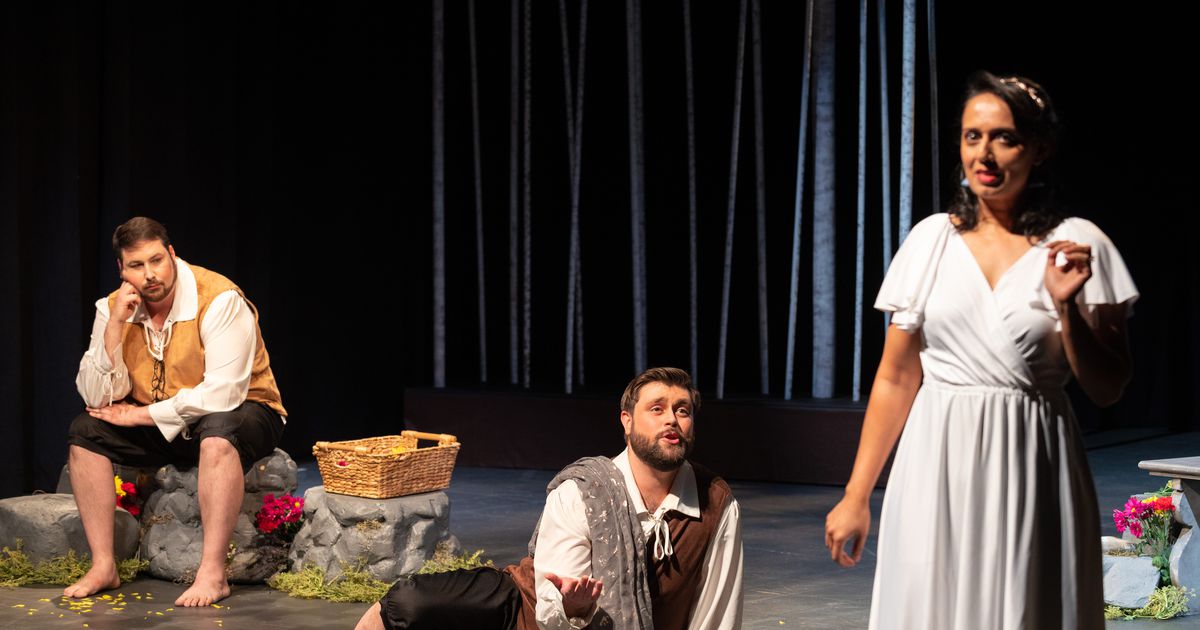 Ah, those were the days, when even minor nobles kept retinues of musicians for both sacred and entertainment services. One such was the 18th-century Englishman James Brydges, duke of Chandos, who built a grand home in what’s now part of London. He collected European art and employed musicians including, between 1717 and 1720, George Frideric Handel.

In addition to composing beautiful extended sacred anthems for Chandos, Handel produced his pastoral opera Acis and Galatea. After a string of Italian operas for London, it was his first theatrical work in English. Charming, compact and modestly scored, it was presented Saturday night in the Wyly Studio Theatre by American Baroque Opera Company. It was the group’s first performance after a two-year COVID-19 hiatus.

The story, based on Ovid’s Metamorphoses, was adapted for opera by the poet and dramatist John Gay (mainly remembered for The Beggar’s Opera). It tells of the love between the mortal Acis and the partly divine sea-nymph Galatea. But the monstrous Cyclops Polyphemus also is smitten with Galatea, and he kills Acis with a stone. Galatea then summons her magic powers to transform her dead lover into a fountain.

The staging, by Rebecca Choate Beasley, was pretty basic, in front of vertical white rods suggesting birch trees. Nymphs and shepherds, including Acis, were dressed as country folk. But Galatea wore a rather classical white gown, presumably suggesting her “otherness.” (I should have thought something watery more appropriate.) The overbearing Polyphemus was done up in ragtag black. Projected supertitles supplied the texts.

In the absence of a conductor, the performance was more or less led by the excellent baroque cellist Eric Taeyang Mun. (Formerly known as Eric Smith, he has decided to embrace his Korean heritage and name.) Joining him on the right side of the performance area were six other expert baroque instrumentalists, playing two violins, two oboes (doubling on recorders), violone and harpsichord.

Two of the singers were outstanding. Alex Longnecker was an ardent Acis, with a handsome, potent tenor and vivid, expressive delivery. Joseph Canuto Leon’s Polyphemus lurched and blustered splendidly, with a big bass-ish baritone.

Gitanjali Mathur’s rather dry soprano, with a narrow, rapid-fire vibrato, lacked Galatea’s essential sweetness and light. Maybe her highly stylized movements and gestures were meant to be “baroque” — or supernatural — but they looked artificial amid otherwise natural acting.

Nicholas Garza lent a light, and sometimes humorous, touch to Acis’ confidante Damon, if not always the most even tenor. The “chorus” comprised four capable singers, although the men overpowered the women.

On shoestring budgets, ABOC allows us to experience baroque operas we’d never otherwise get around here. Instrumental standards have been pretty consistently high. Ultimately, though, baroque opera is all about voices, and casting has been uneven. I wonder if the company doesn’t really need a conductor with a keener ear for singers. That of course would cost more money.

As with some other presenters recently, there were no printed programs. Patrons were directed to the company’s website, but glowing smartphones are an unwelcome distraction at an opera performance.