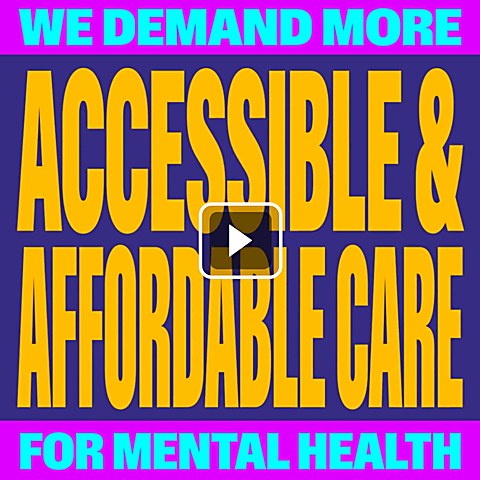 Background: May is Mental Health Awareness Month, but we took the stance this year that awareness alone isn’t enough. In this campaign for the American Foundation for Suicide Prevention (AFSP), we focused on turning awareness into active advocacy. Amid a pandemic and multiple social justice movements, the public is finally starting to understand the importance of mental health. Thousands of individuals self-identify as advocates for mental health. They may even work for social change personally, such as putting “mental health advocates” in their social media bios or sparking conversations within their peer groups. But most do not actively participate on a civic level—whether community, local, state or federal—or even know where to start. At the same time, mental health resources remain inaccessible to many and require legislation to improve funding and support. Our goal was to make it easy to become involved in advocating for mental health.

Design thinking: Mental health is personal. From the beginning, we built the campaign to empower individuals to make their own demands related to the specific mental health issues or causes about which they are most passionate. The centerpiece is an online demand artwork “generator” that makes it easy to create custom, shareable digital posts, encouraging participation through personalization with control over message and visuals. We knew we wanted to build a participatory campaign with multiple levels of actions, starting with the personal and building up to the community involvement, as well as state and national advocacy. On the campaign’s microsite, we included clear links for finding local events, information about key legislation for mental health and a Public Policy Action Center that facilitates contacting your government representatives and local media directly to show your support for legislative change.

Challenges: There are many barriers and biases regarding mental health, and a huge range of issues need legislative support. In the beginning, we weren’t sure where to focus the public’s advocacy, but we turned that into an advantage and a prompt for others to amplify the specific mental health topic about which they care most. AFSP identified five core demands that it calls for as an organization, but leaving it open for participants to put forward their own demands has highlighted the breadth of the issue.

Favorite details: While not quite a detail, our favorite part of this project is seeing the wide variety of unique messages and vibrant color combinations that people are making with the artwork generator by following the hashtag #MoreForMentalHealth on Instagram and Twitter.

New lessons: We learned just how personal mental health is for many people and how change starts with individual action. When reading the various demands people make for mental health, we’ve noticed that personal calls like needing empathy and listening have taken equal footing alongside big-picture demands like funding the new national 988 crisis hotline. We started calling the former “squishy” demands—calls to action that are less tangible but just as important for mental health—and worked to ensure they had a place in the campaign in addition to legislative advocacy.

Visual influences: With the campaign’s focus on advocacy, we looked to the vernacular design of protest signs and their need to make messages as large and visible as possible with materials on hand—whether using large, condensed sans serifs on placards or markers on cardboard. We took advantage of Dinamo’s ABC Gravity typeface and its variable font format’s ability to widen and condense fluidity to fit any space and combined it with a fluorescent color palette, making the art direction as visually loud and demanding as possible. We wanted to create a campaign that couldn’t be ignored among crowds or on social media feeds.

Click on an image to view more from each project

The mass murderer Guevara makes an appearance in DC this Saturday