For unfailing fans of acclaimed Canadian singer-songwriter, poet and novelist Leonard Cohen and prolific American composer Philip Glass, including those intrigued by their collaboration, Australian Contemporary Opera Co’s (ACOCo) Book of Longing (presented in partnership with The Wheeler Centre) is an absorbing, meditative work in which Cohen’s insightful poetry is respectfully coloured with Glass’ hypnotic musical signature. In front of a full house at the wondrously framed steel and glass surrounds of Federation Square’s Edge Theatre, it was beautifully performed and sensitively played. 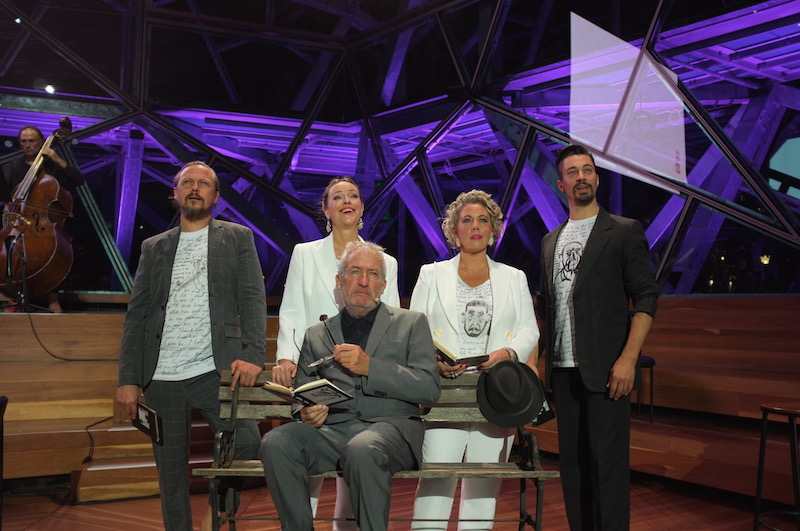 It’s not the first time Glass and Cohen’s Book of Longing has been performed in Melbourne. Almost 14 years ago, it was programmed by the Melbourne International Arts Festival, a newish work at the time having only premiered a little over a year earlier, in June 2007, in Toronto.

When Cohen shared an early draft of his collection of poems in a meeting with Glass some years earlier, the idea was born to set a selection of them to music and imagery. The result is an almost 90-minute continuous performance incorporating poetry reading, four artists singing the majority of the work from vocal solos to quartets, alongside eight musicians with featured solos.

ACOCo Artistic Director Linda Thompson allows the work to speak for itself, thoughtfully avoiding any fandangled concept from interfering with the poetry. For this, Thompson has assembled a talented cast whilst also incorporating five skilled ACOCo young artists – Caitlin Toohey, Genevieve Droppert, Alexandra Amerides, Callum Andreas and Daniel Felton – who add subtle touches of variation to the ensemble mix.

British-born, Melbourne-based actor Richard Piper is a drawcard on his own as the voice of Cohen. Piper is perfect at landing Cohen’s poetry with seemingly grounded wisdom and wry matter-of-factness. Commanding, smokey-voiced and a splendid match for Cohen, Piper arrives on stage – where the cast are already randomly seated in position with their own copy of Book of Longing – to take his seat on a park bench. What might be longed for from the more than 20 poems covering an assortment of themes that include romantic longing, witty self-parody and spiritual endeavour, was for Piper and the spoken word to have marginally greater exposure.

Nonetheless, the word remains central, both reverently treated by Glass’s stirring music and as part of a minimalist staging featuring little more than an overhead screen displaying page after page of the poems, with drawings sequentially drawn from scratch and annotations that highlight or condense a thought. In all, Alice Edy’s visuals are a soothing and gentle accompaniment.

The entire cast, including the musicians, are smartly dressed in mainly black with white reserved for the two female soloists, soprano Emily Burke and mezzo-soprano Dimity Shepherd. All are barefooted, as if disciples, perhaps as an attempt to hear the words grounded directly to life experience. Regardless, it says something raw about the poetic honesty.

Highlights include Shepherd bringing her stylishly dark vocal assets to characterful good use in Boogie Street. Burke’s penetrating splendour is introduced in Love Itself, which she shares with resonant suave-voiced baritone Christopher Tonkin, and robust tenor Martin Buckingham ignites great expressivity with How Much I Love You. Along the way, the singing rings with soulfulness and the ensemble move sparingly about as Glass weaves the voices among recurring musical themes that nestle favourably with the poetry, utilising compositional techniques true to his enigmatic style. By the River Dark (Babylon) and The Faithless Wife (The Night of Santiago) are two gems of that fusion.

Originally scheduled as a one-off performance, which quickly sold out, ACOCo’s The Book of Longing heads into a second night to bathe an eager audience in poetry and music of rich, contemplative and witty form. And, no doubt, a good discussion will follow.

Australian Contemporary Opera Co performs Book of Longing on 14 May at 8pm.

Thu May 19 , 2022
Fondazione ICA Milan presents “Gezeichnet”, Italian solo show by Miriam Cahn curated by Alberto Salvadori and Luigi Fassi. Miriam Cahn’s work finds its core in life, made manifest through the representation of the body. The main characters of her works, which at a first glance elude the distinction between human […]