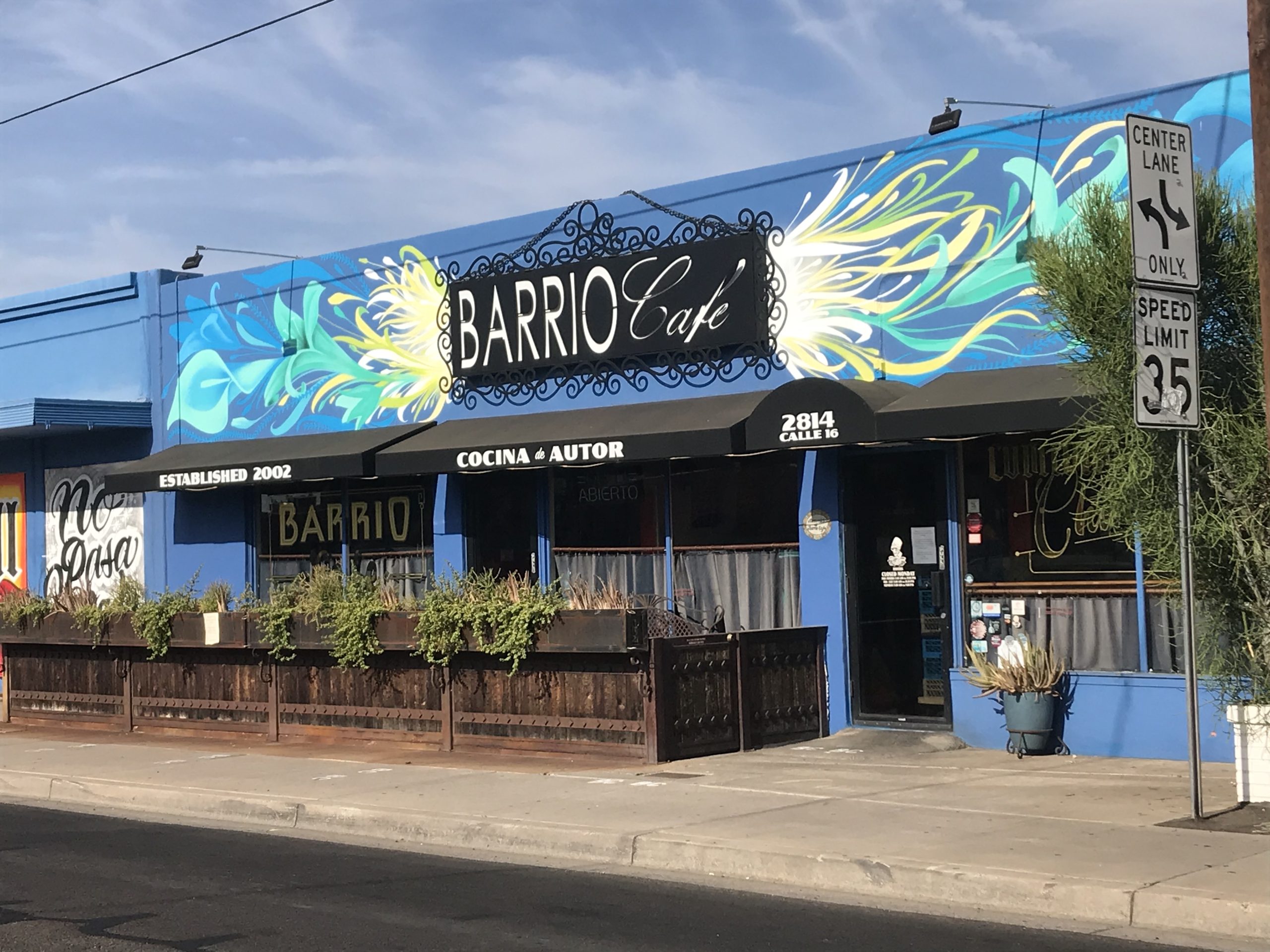 PHOENIX — Pristine white plates frame the Mexican cuisine created by Chef Silvana Salcido Esparza, whose dishes infused with pops of color echo the artworks filling the walls inside her Barrio Café. Opened northeast of downtown Phoenix in 2002, it’s a hub for arts and activism, where Esparza counters colonizer narratives through cooking, culture, and community.

For years, she’s been commissioning primarily Phoenix-based artists to paint interior and exterior murals that often center her Mexican heritage and creative interests beyond food. Behind the café, artist Lalo Cota paired taco imagery with lowriders, paying homage to the chef’s immersion in local lowrider culture and her collection of cars — including one bearing Cota’s airbrushed image of the chef’s beloved nephew who died, his head adorned with a golden crown.

For Esparza, who moved to Phoenix in 1995, the lowriders represent Chicano culture and community. But she’s also drawn to their aesthetic. “Lowriders are pure art,” she says. “And art is part of everything I do.”

Small paintings and drawings by artists whose subjects range from lucha libre wrestlers to mariachi skeletons bring warmth and charm to the café. Inside an office space the chef shares with Barrio Café co-founder and business partner Wendy Gruber, there’s an area called WalkBy Gallery, where rotating exhibitions are visible through large windows flanking the sidewalk. For a time, a trio of artists operated Por Vida gallery in an adjacent space; today it’s home to Frida’s Garden, another venture to rise from the chef’s creative family.

Barrio Café anchors a part of the city dubbed Calle 16, a name referencing one of Esparza’s most impactful contributions to the region. In 2010, she collaborated with local artists to launch the Calle 16 Mural Project as a protest against Arizona’s SB 1070. Nicknamed the “papers please” law, the legislation (which has since been largely gutted by the U.S. Supreme Court) was widely criticized for promoting racial profiling and anti-immigrant sentiment.

Today, the Calle 16 area boasts pieces by renowned artists such as California-based El Mac, Oklahoma-based Yatika Starr Fields, and Hong Kong-based Caratoes. And the front of Barrio Café serves as a changing canvas where artists like Douglas Miles often treat social justice issues of the day — making Calle 16 one of the best places to see mural art in Phoenix.

Meanwhile, Esparza’s influence is evident in other creative hubs, where artists she supported early on have received significant commissions. For Cota, the commissions include a massive mural on a new power substation in the Roosevelt Row arts district, where a skeletal figure donning jeans and a white T-shirt floats over the city skyline at sunset. For Tato Caraveo, they include an expansive mural painted along one side of the Arizona Opera building that sits across the street from Phoenix Art Museum, where a couple plays with bubble wands while sitting back-to-back on a lush green lawn.

Turns out, there’s another creative enclave where Esparza has married food and culture to masterful effect. It’s a strip of Grand Avenue known for arts and historic preservation, where artist Lucretia Torva painted a mural showing Esparza in a white chef jacket, her arm thrust forward with an oversized spoon as if she’s ready to feed the whole city.

When Esparza opened her fine dining concept Barrio Café Gran Reserva on Grand Avenue in 2016, she commissioned Diaz to fill the ceiling and walls of a small bathroom with black and white imagery calling back to early 20th century revolutionaries Pancho Villa and Emiliano Zapata. “It was a cry to the Mexican revolution, and the current revolution that continues today,” she explains.

Just outside the bathroom, margaritas painted in bright pink and green played on mainstream perceptions of Mexican culture. Inside the dining room, subtler shadow-like imagery of immigrant farm workers in the fields, painted below table-height, quietly channeled the chef’s more subversive side. “There was an elegance and beauty in the dining room,” she says. “But if you really studied it, it was a critique of social class.”

In October 2020, presidential candidates Joe Biden and Kamala Harris visited Barrio Café on the campaign trail, another sign of Esparza’s relevance to the region’s conversations about food, art, and politics.

That confluence of food and culture is reminiscent of Esparza’s childhood, and the sensorial touchpoints carved into her memory and emotions. Raised in a multi-generational household in California, the chef recalls her father smelling like bread after working the night shift at a local bakery, and the time she spent cooking with her grandmother. During trips to Mexico, she’d marvel at the mercados filled with food and art, and the sites where her father explained that frescos painted by Diego Rivera and other artists were a form of storytelling meant to preserve their cultural heritage.

Today, Esparza is the one telling the stories.

The 61-year-old chef is writing an autobiographical cookbook, where she’ll address discrimination she’s faced as a lesbian chef and complications wrought by fluctuating sarcoidosis symptoms. She’s still creating fresh menus reflecting her family traditions, the classical French cuisine she studied in culinary school, and distinct regional cuisines explored during a year of backpacking through Mexico.

While incorporating Indigenous homages and influences, the chef wears a political lens. “I look at mole from a political eye,” she says of the sauce that’s an essential element of Mexican cuisine. “Their national dish is mole poblano, but that’s a colonized version of an Indigenous dish that’s been Martha Stewartized.”

As her hybridized approach to creative activism evolves, Esparza continues to draw inspiration from the artists and community members who help give it life. “We’re familia,” she says. “That’s everything.”