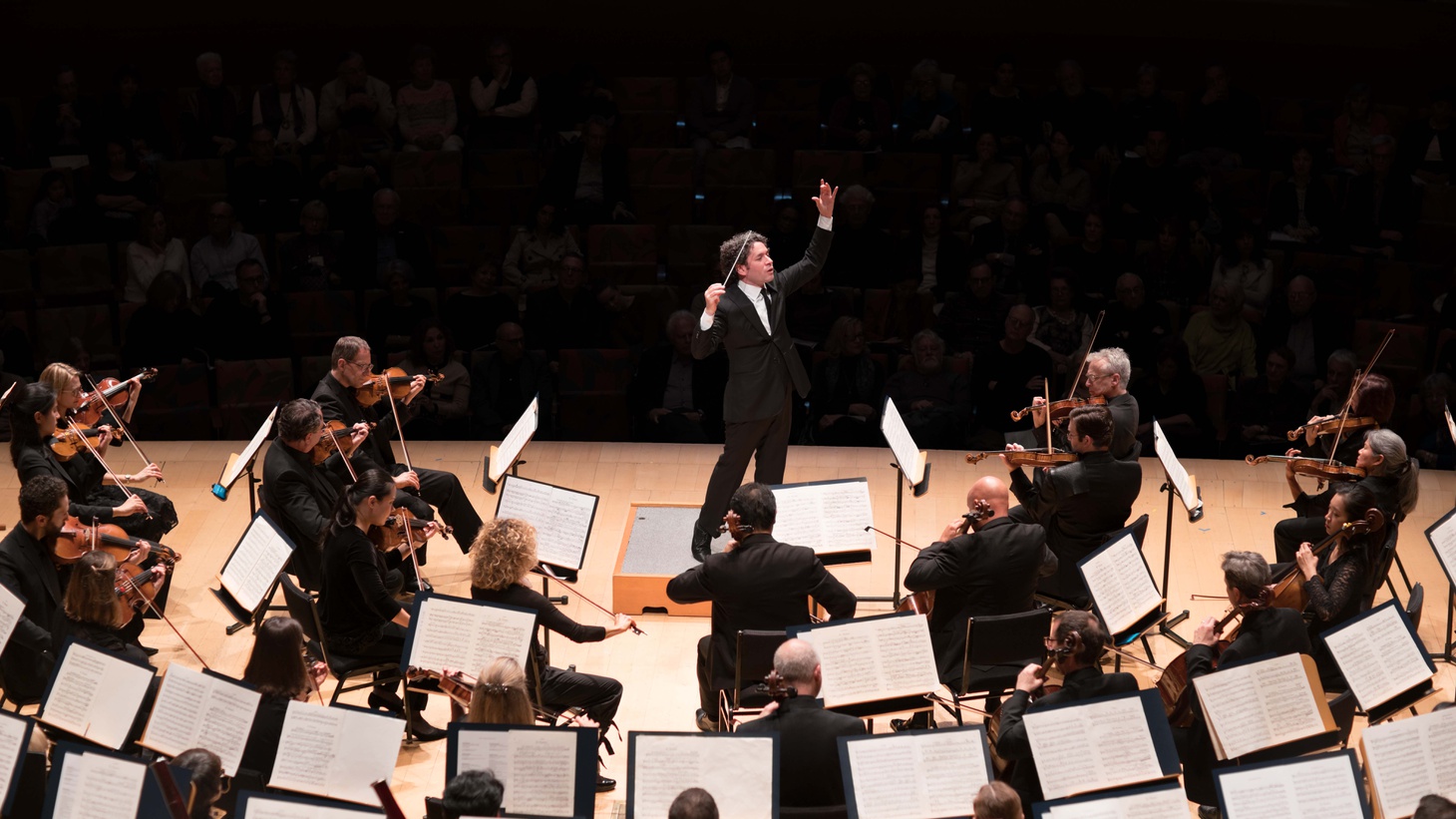 This week, the LA Philharmonic will perform “Fidelio,” conducted by Gustavo Dudamel. “Fidelio” is Beethoven’s only opera, which he spent nearly a decade agonizing over since 1804, at a time when he was losing his hearing. To honor Beethoven, the cast will feature Deaf and hearing performers. It’s the first collaboration between the LA Phil and the Tony Award-winning Deaf West Theatre.

This interview has been edited for length and clarity.

KCRW: What is the plot of “Fidelio?”

Alberto Arvelo: It’s about freedom. It’s about basically this woman, Leonore, who is trying to find her husband that disappeared two years ago. And she has information that her husband, Florestan, is somewhere in the dark dungeons of this evil governor, [Don] Pizarro. So in order to save her husband, Leonore goes to the prison, pretending to be a man called Fidelio. And she finds the way to, at the end, free Florestan from jail. So it’s a metaphor about freedom, the lack of freedom, hope, and obviously a very, very powerful love story at the same time.

Why was it so difficult for Beethoven to complete this?

Alberto Arvelo: I think but Beethoven was obsessed with this opera. He composed “Fidelio” in his, let’s say, process [of] becoming deaf. And as maestro Dudamel was saying the other day to our actors and singers, in a way, this whole opera is signed, is touched by the energy of what he was experiencing in that moment. I think, in a way, this opera more than probably any other piece, talks about his soul and represents his … musical legacy. So it’s a really complex piece made of this amazing colors and tones and everything. So it’s a fantastic, fantastic opera.

DJ Kurs: Beethoven wrote this opera from his memory of music or his impression of what the music sounded like. And that’s a similar process that we do here. What we are translating is music into sign language. We take the score, the music, and we have a team of ASL choreographers who work with our actors, developing translations of each of those musical pieces into sign language. And the most important thing is that the translation actually delivers the meaning and the metaphor, but it also has to carry the meat, the emotion, and the feeling, all of the things that Beethoven wanted us to feel. All the dreaming, the longing that he had, all of that, that he is conveying through his music, we want to convey as well, the depth and the process of it. And I think that the result will show that you see how our actors bring music to life, visually, through their bodies, their hands, and most of all, their eyes. And I’m really excited to see this. It’s our first opera ever.

Can you explain how someone who is Deaf from birth can understand and interpret music?

DJ Kurs: I was born deaf. I’ve never heard music in my entire life. But I think I understand music. I think Beethoven had a similar idea, and that he wrote from his heart, from his mind, instead of focusing on just the sound. The music is absorbed … through different ways other than only the ears.

And it’s a similar process to how our actors are doing this. They see the pianist, they feel the vibrations from the piano and the instruments. They also work with their partner singers. And they see the emotive expression on the faces of the singers.

And Beethoven’s process is something that we’ve analyzed. We’ve gone through each song, the tempo, melody, all of the elements of music, we have dissected and created a journey that takes us through specifically each character in each particular piece of music. And all of that together, we are attempting to do our best to really bring what the music feels like to an audience who will see it. And if you were to ask me, I think it’s worth it. It’s beautiful. I think it’s worth it for our Deaf audience and the public in general as well. And I’m hoping that this will be the first of many.

Alberto, describe what it’s going to look and sound like for the hearing audience.

Alberto Arvelo: I think this experience is changing all of us … in a very deep way. … We are perceiving music from a different point of view. Actually, a few minutes ago in the rehearsal, singer who plays Leonore was was telling … the actress who plays Leonore, ‘You are changing the way of seeing because your energy is so powerful, what you transmit is so profound that I’m understanding this character almost for the first time.’ And I think that represents exactly what we all are feeling. I think this is a sort of revelation for both audiences. Because we are expressing not only what the music is, but also we are getting deeper into the soul of the story, and the characters and everything. It’s basically, a collective effort to achieve beauty from different places that for me, it’s extremely moving and again, a revelation.

Do you understand Beethoven better by working with DJ and the Deaf performers?

Alberto Arvelo: Definitely, the answer is yes. And it’s happening to all of us. I mean, it was hard to understand Beethoven, almost impossible for us. But in this process, Deaf artists are giving us a perspective that was not open to us before. … It’s a learning experience for all of us, everybody.

DJ, Coro De Manos Blancas (the White Hands Choir) from Venezuela will make an appearance.  Tell us about this choir and what they’ll be doing.

DJ Kurs: They are a group of … Deaf youth from Venezuela, from Gustavo’s hometown. … They will be acting as … the Deaf chorus, reinforcing some of those moments in the opera. … It’s been very inspiring for me to work with them. I know Venezuela, of course, has a different sign language. … We use ASL, but we have this open-hearted experience where we connect. And I really sense it’s an honor to take this journey together with them. And I know that what they’re experiencing and seeing here, they will bring home to Venezuela. And I’m excited for them to see where it leads them after this production is over.

DJ Kurs: Yes, in a word. I mean, they speak Spanish as their spoken language. It’s not necessarily the foundation of the Venezuelan Sign Language, but there is a relationship, as there is in American Sign Language and English. But we find a common ground to communicate with one another with very little difficulty. And that experience of seeing them express themselves in their own language helps me to better understand what we’re doing to express this opera to our hearing audience members. It’s all interconnected, every element of this piece.

How is the opera relevant to us in this modern age?

DJ Kurs: I think for me as a Deaf audience member and as a fan of the arts, this will be the first time that I will ever be in Disney Hall, enjoying a performance. That iconic building on Grand Avenue, I’ve passed tons of times, and I’ve never entered it. And I think that this is the period — it’s relevant for opera to be accessible to new audiences. And that’s also connected to what we, as the Deaf community, have craved and desired. We’ve wanted representation, of course, we wanted visibility. And we wanted the opportunity to do this kind of work, to bring our language, to bring the ability to express and communicate through our bodies to the art form of opera. And it’s an absolutely thrilling process.

How did this collaboration come together?

DJ Kur: While the Los Angeles Phil approached us … several years ago. I said no at the time because opera at that time felt just enormous. That was a world that was so foreign to me. But they approached it again, I would say a couple of years ago. And I don’t know why, maybe it was the pandemic changed so many things, the perspectives on how we practice our arts, how we deliver them, and maybe it gave me … a false sense of courage. I don’t know that it was the right time to do this, to expand those boundaries that Deaf West has lived inside of now. At Deaf West, we’ve done straight plays and musicals. We’ve done many productions over the 30 years that Deaf West has been in existence.

But I think it’s not only Deaf theater for Deaf people, but it’s also theater for a larger audience as well. And to have this seamless blend of the operatic music and ASL, I know that we are committed to having this experience being [an] equal access experience and equitable experience of the arts for both hearing and Deaf audiences. So I think anyone in their seat at Disney Hall will understand the entirety of the production. And once we knew that the LA Phil was all in and they were committed to this, we said, ‘Let’s do it.’ We got a great, phenomenal group of collaborators, including [Alberto], our director, and of course, maestro Dudamel as well, himself. It’s truly an honor to do this.

Alberto, is Gustavo Dudamel thinking of doing a different opera or a different musical performance with Deaf West in the future?

Alberto Arvelo: We have been talking about it, actually. Nothing defined yet. But this is an experience that we all feel that should be replicated and taken to different places. It is important for the audience, it is important as a message of integration and artistic collaboration. So yes, I think we are all feeling the same thing.

‘We buried our sportswear’: Afghan women fear fight is over for martial arts | Afghanistan