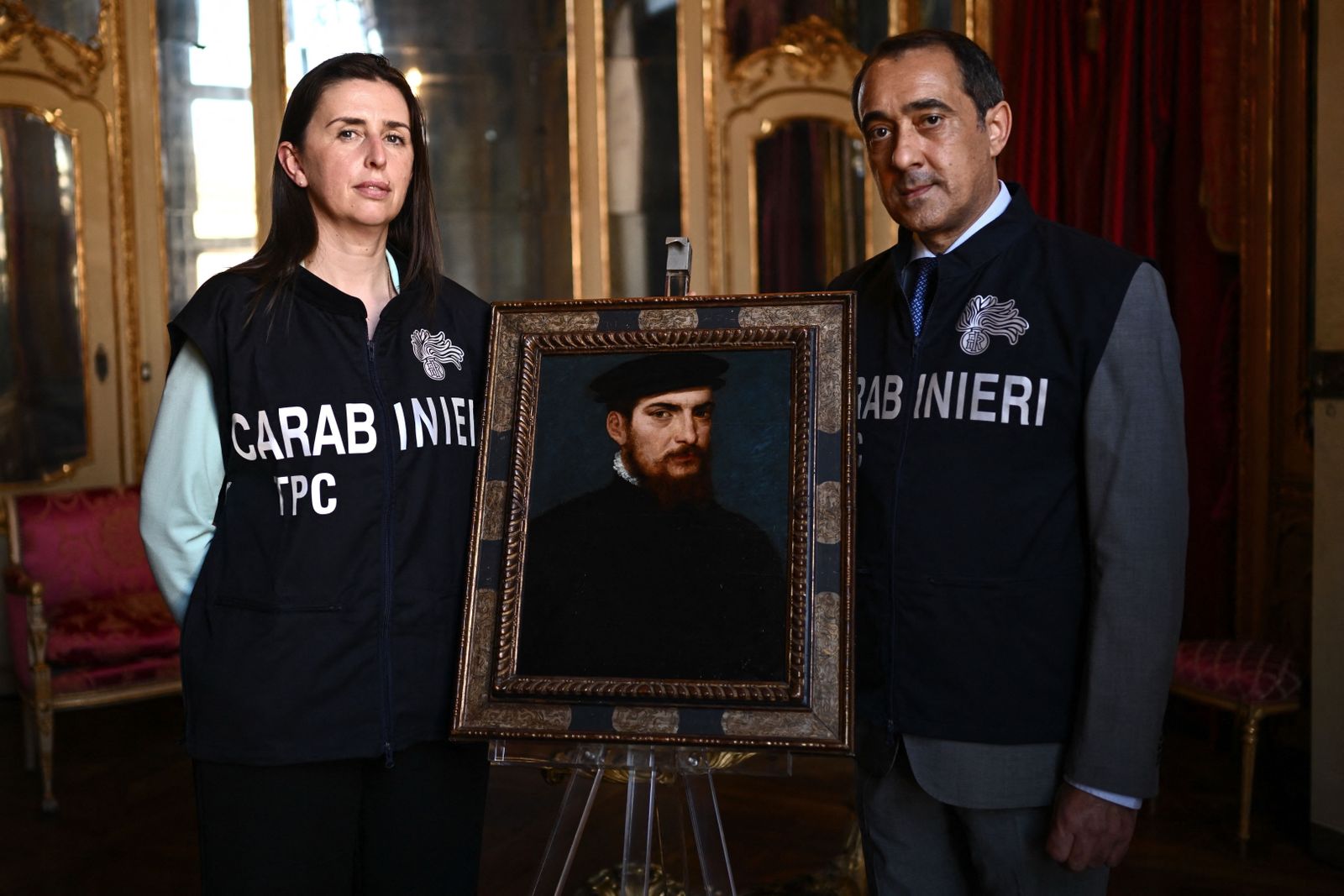 In Titian’s 1512 painting Gentiluomo con berretto nero (Portrait of a Man with a Beret), a red-bearded man with a hat stares knowingly from his frame. But authorities didn’t know where the portrait was for the nearly two decades that have passed since the painting disappeared in 2004.

Now, Forbes’ Rebecca Ann Hughes reports, Italy’s Carabinieri for the Protection of Italy’s Cultural Heritage, a specialized art crimes unit, has recovered the painting and returned it to Italy.

At first, Italy’s cultural protection unit thought the portrait, which is valued at about $7 million, had been illegally smuggled to Switzerland. Instead, a tip led a unit of the Italian police to a workshop in the Asti area of Piedmont. They discovered, then confiscated, the piece, returning it to the Italian state at a May 19 ceremony. Meanwhile, Forbes reports, two Swiss citizens are currently under investigation.

Tiziano Vecellio, known in English as Titian, made the painting around 1512. The Renaissance master was one of Italy’s most notable 16th-century artists. Born in Pieve di Cadore, a small town close to Venice, around 1488, he gained fame for his vibrant and realistic style. His subjects ranged from portraits to mythological tales to landscapes. Arguably his most famous work, the 1538 Venus of Urbino, depicts a reclining nude female figure staring at the viewer and can be found in the Uffizi Gallery in Florence, Italy. The long-lived painter died of the plague in 1576.

This isn’t the first time a lost or stolen Titian has turned up. Last year, Smithsonian’s Isis Davis-Marks reported, researchers realized that a painting that has hung in a British church for a century was actually a Titian. And earlier this month, a long-lost Titian painting of a penitent Mary Magdalene discovered in the art collection of Queen Christina of Sweden garnered $5.1 million at auction.

Conserving and recovering art is serious business in Italy. The Turin branch of the Carabinieri’s Cultural Heritage Protection Unit, which recovered the painting, consists of 280 investigators with the goal of preserving Italy’s cultural heritage, per Artnet News’ Dorian Batycka. Founded in 1969, the specialized art squad protects works from natural threats, such as flooding, as well as trafficking and theft.

As NPR’s Sylvia Poggioli reported in 2017, the Carabinieri is the first national unit of its kind in what is known as an “art theft playground.”

But is the piece they recovered actually Titian’s? On the day of the ceremony, outspoken art critic and politician Vittorio Sgarbi said that the painting has been erroneously attributed. Andrea Donati, considered one of the most authoritative scholars of Tiziano Vecellio and Renaissance art, agrees, stating that the work’s style is too different from Titian’s.

“I cannot even see the shadow of Titian in this portrait,” Donati said in a statement, calling the attribution “sensationally wrong.”

The Cabinieri says it’s a Titian, but Donati vehemently disagrees. “Everyone can get to know Titian in the churches and museums where his works are kept,” says Donati in the statement, “but recognizing a Titian can only be done by those who have studied him for years, proving that they have mastered the sources, the matter and the history of art.” Business And Finance Turns Into Quickest