Jenny Moore will step down from the Chinati Foundation after serving nine years as director. Her term at the nonprofit organization, which manages more than 100 works by Donald Judd in Marfa, Texas, will officially end on July 31.

Marella Consolini, who was the chief operations officer of the nonprofit institution from 2010 to 2014, will act as interim director while the board of trustees conducts an international search for Moore’s replacement.

During her time as director, Moore overhauled the organization’s management and vision, transforming Chinati, which was established in a series of warehouses on 340 acres in the west Texas desert by Judd in the 1980s, into a full-fledged contemporary art museum with an annual attendance that peaked around 50,000 before the pandemic. In 2017, she introduced the multiphase “Master Plan” for the preservation of the museum’s buildings, the improvement of its visitor experience, and the restoration of its vast grounds. 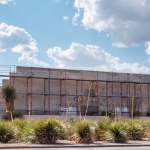 Among her accomplishments is the 2016 unveiling of untitled (dawn to dusk), a 10,000-square-foot, C-shaped concrete structure by Robert Irwin. It’s monumental reconstruction of a former army hospital, divided by corridors of alternating windows and translucent scrims that cast the building half in darkness and half in sunlight.

This April the museum completed a $2.7 million restoration of the John Chamberlain Building, one of three converted wool warehouses dedicated to contemporary artists Judd admired, and the 22 large-scale sculptures made of crushed automobile parts installed inside. It is the world’s largest permanent installation of Chamberlain’s works, and had for years suffered damage in the region’s scorching heat, high altitude, and winds.

“With the first phase of the master plan complete, and after successfully navigating the organization through the most critical moments of the pandemic, the timing was right for me to transition and for new leadership to take the helm of the organization,” Moore said in a statement issued by the foundation.

Mon Jul 4 , 2022
The cast of “Lempicka” at La Jolla Playhouse. Photo by Matthew Murphy She lived a wild tempestuous, roller coaster life. Sometimes wealthy, sometimes poor. Both famous and forgotten. An Art Deco artist, iconoclast and provocateur, a tastemaker and groundbreaker, the toast of Paris, New York and Hollywood, who died in […]