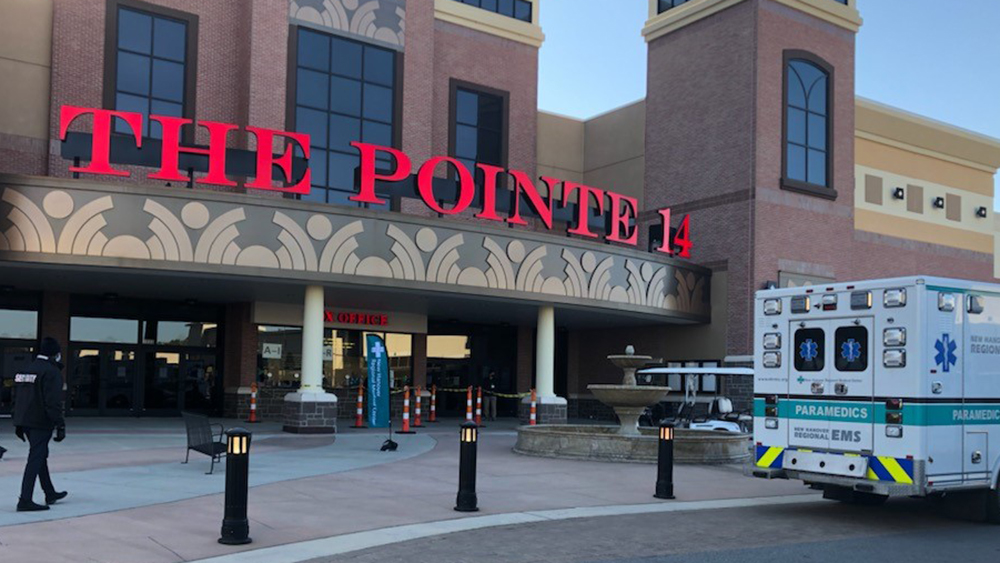 Stone Theatres, a small cinema chain with venues in North Carolina and South Carolina, has been empty for months after theater operator Dale Coleman made the difficult decision to stay closed due to the lack of new movies to show.

Yet for the first time since March, the lobby of one location — The Pointe 14 in Wilmington, N.C. — is bustling. People aren’t coming to see “The Croods: A New Age” and they certainly aren’t showing up for “Wonder Woman 1984.” Instead, nearby residents are going to their local theater to get COVID-19 vaccines.

The local New Hanover Regional Medical Center has set up shop inside the theater to vaccinate those eligible to make appointments. Currently in North Carolina, only frontline health-care workers, longterm care staff and residents, and adults ages 65 and up can register to receive the vaccine. Carolyn Fisher, New Hanover Regional Medical Center’s director of marketing, says the facility has been using clinic space and areas within the hospital, but the movie theater allows them to accommodate more people in a shorter period of time.

“This allowed us to go from administering a few hundred vaccines a day to about 1,300 a day,” Fisher says.

On Wednesday, the first day the vaccine site opened, hospital employees and volunteers administered 600 doses before running out at 4 p.m. On Thursday, another 1,500 citizens were able to get the shot. North Carolina heath officials plan to administer 30,000 at The Pointe 14 theater alone due to the expansive area. The county is administering the Pfizer vaccine, which requires two doses 21 days apart.

“It’s the perfect situation,” Coleman, the vice president of Stone Theatres, told Variety. “We have plenty of parking and a huge lobby.”

The Pointe 14 theater will be open Mondays to Saturdays from 9 a.m. to 5 p.m. Local residents have been making appointments through the hospital’s online registration system. Once they get to the theater, they check in at the box office, which has gone from selling tickets to handing out medical forms.

Inside, there are 12 stations set up throughout the lobby. After getting the vaccine, people enter the auditoriums to wait and make certain they aren’t having adverse reactions. The New Hanover Regional Medical Center team brought in specialized equipment, including medical grade refrigerators with temperature trackers, golf carts to assist patients from the parking lot to the box office, as well as tables, chairs, laptops and other necessary supplies.

Coleman calls the process of transforming his theater into a vaccination site “fairly easy to accomplish.” He and the New Hanover Regional Medical Center first received permission from the county and local fire marshal. Coleman cross referenced some insurance requirements and let the Wilmington-based hospital staff handle everything from there.

Now, Coleman is spreading the word in hopes that his fellow film exhibitors can follow suit. Stone Theatres has two additional locations in North Carolina and two others in South Carolina, so Coleman has reached out to those local health department officials to offer his cinemas as vaccination sites. He’s also called up the National Association of Theatre Owners, the film exhibition industry’s main lobbying group, to encourage cinema operators nationwide to consider hosting vaccine distributions in their empty lobbies.

“This is something where we can be part of the solution,” Coleman says. “We are thrilled and very proud we can donate our theater and participate in something that we think is extremely important, not just for our business but the community in general.”

The International Alliance of Theatrical Stage Employees, the union that represents technicians, artisans and other behind-the-scenes workers at entertainment venues, has similarly pushed to use live entertainment venues as vaccination sites. In Los Angeles County, Dodger Stadium recently transformed from a COVID-19 testing center to a vaccine site, while the Los Angeles Forum is also a mass vaccine site. Some smaller towns like Wilmington, which has a population around 100,000, are making use of independent businesses nearby.

For empty entertainment venues, it’s a win-win. The quicker the public reaches mass immunization, the faster that movie nights, concerts and live theater can return. Coleman attempted to revive his theaters in September when Christopher Nolan’s “Tenet” first graced the big screen. Yet he quickly found that people weren’t ready to return to the movies, and he was losing more money keeping venues open than he was when they were closed.

“We applaud Stone Theatres’ spirit of public service,” John Fithian, the president of NATO, told Variety. “The sooner the vaccines are made widely available, the sooner communities across the country, and the movie theaters that serve them can return to normal life.”

Coleman says his theater chain is bearing the cost of turning the lights back and welcoming locals to get the vaccine. He estimates monthly utilities cost between $15,000 to $20,000 at the Wilmington location alone. That doesn’t include loan payments, rent or other essential expenses, such as projection equipment upkeep. The chain received PPP funding earlier in the year, and it’s banking on additional financing from Save Our Stages, the part of the government’s COVID-19 Relief Bill designed to support independent entertainment venues.

“That’s been my No. 1 priority each and every day,” Coleman says referring to grant applications. “We need that desperately.”

He plans to continue using his theater as a vaccination site until doses run out. He doesn’t expect moviegoing to see a miraculous return before the population achieves mass immunization anyway. But at the moment, he’s happy to give back to the community that’s made his theater a cornerstone in southeast North Carolina.

“This is been one of the most rewarding things our company has ever done,” Coleman says.

Division Of Finance And Business Economics