Norwegian Cruise Line is gearing up to launch an entirely new class of ships that will redefine the line’s upscale, contemporary offering including numerous firsts not previously found on other ships. In August, pop superstar Katy Perry, who herself enjoys cruising, will christen Norwegian Prima in Reykjavik, Iceland, as its godmother. This is the first of six ships in the Prima class. Norwegian is the first major cruise line to hold a christening ceremony in the country.

The company officially took delivery of the ship this week in its final preparations for its inaugural sailing in late August. Norwegian Prima has space for 3,100 passengers plus the highest crew-to-passenger ratio in the Norwegian fleet.

Other exciting features on the ship include the largest and first-of-its-kind, three-level race track at sea (dubbed the Prima Speedway) and “The Drop,” the world’s first free-fall dry slide, which sends you into a 10-story plunge on the side of the ship that reaches more G-forces than an accelerating F1 race car.

According to Fincantieri, this is the “most impressive and complex” ship it has ever built given its onboard amenities and high skyline. It is the first Norwegian ship that was built at the Italian shipyard.

By 2027, the company will add five more of these new-build, Prima class ships to its fleet. Norwegian Cruise Line president and CEO Harry Sommer explains what this new class of ships will offer and why now is the right time to introduce this new product.

What makes Prima different, and why launch now?

There are some exciting new features aboard the ship that will really surprise regular customers. This includes a new food hall, completely redesigned theater, new entertainment offerings like live game shows and plenty of glamorous interior design touches. Another feature is Ocean Boulevard, a 44,000 sq. ft. long deck that wraps around the entire ship putting passengers up front with the ocean at all times.

Norwegian Prima will have the first outdoor sculpture garden for the cruise line as well as $6 million of artwork on board including a collection of NFT pieces that guests can view online before, during and after their sailing.

These ships are also going to be bigger than our other ships providing more space for each passenger as well as more crew on board to take care of them. Now is the right time as the world reopens and demand for cruising rises. During its debut week, sales for Norwegian Prima sailings broke records achieving the best sales day and best initial booking week sales in the company’s 55-year history.

What kind of entertainment is onboard?

Entertainment is a big component of Norwegian Prima (and the brand overall), and many of the shows on board are actually developed in-house. Norwegian is rare in that it has its own wardrobe department that creates costumes and design materials for shows, too.

The three-floor theater features special seating that can easily transition from a multi-tiered theater to a completely flat space to become a night club. The setup also allows performers the opportunity to spend more time interacting with the audience.

Unlike most other cruise ships that only use the theater space for evening entertainment, Norwegian Prima will host, full-scale, familiar game shows, including “The Price is Right,” “Supermarket Sweeps” and “Press Your Luck.” These won’t just be cruise ship remakes; instead, they will offer the full experience including a full-size money wheel from “The Price is Right,” and large-scale supermarket layout for “Supermarket Sweeps.” Prizes for winners will include cars and appliances, among other things, just like the TV programs.

Will the cabins be the same as other ships?

The Prima class of ships will have the largest cabins in the fleet including both inside and balcony or ocean-facing cabins. It will also have a variety of suites with 13 different categories including the biggest three-bedroom suite on a new cruise ship at the moment.

Nearly 20 percent of bookings are for Haven suites, indicating the desire for top-of-the-line experiences.

In the standard stateroom category, Norwegian Prima will have the largest-ever inside, oceanview and balcony staterooms as well as the biggest-ever bathrooms and showers.

The focus is to make this class of ships more upscale and premium in every way from the food and beverage elements to accommodations and entertainment. It will be noticeable throughout the ship. Well-known designers are responsible for the look with dynamic lighting fixtures and art everywhere including a bespoke 7,300-pound chandelier hanging in the main atrium.

What’s new for the dining scene onboard?

This is especially exciting as there will be more outdoor dining venues on the sides of the ship. Norwegian Prima is home to the company’s first food hall, which will have a variety of international food stations. This includes a Texas roadhouse-style barbecue with rotisserie-prepared meat and brisket, seafood grill, ramen and noodle bar and tapas truck. These will all be complimentary and in addition to the traditional buffet and a la carte venues on board. Two full-service Starbucks will also be available on the ship.

Passengers can visit the various food stalls or enjoy table service by ordering via tablets, much like you see in many airport terminals today. New restaurants will include a Mediterranean outlet named Palomar, a hibachi-style Japanese venue and a new sushi house. Menus in the main dining rooms are getting a revamp, too, including a build-your-own-pasta option where guests can customize their meal with their choice of pasta, sauce and toppings.

In the same food hall, Norwegian has built its first Indian bistro, including two tandoor ovens. Indian cuisine has always been popular at buffets, and the line wanted to test out offering a separate Indian dining venue.

At Le Bistro, guests can dine amid three, floor-to-ceiling Austrian chandeliers, valued at 70,000 euros each, and gold leaf wall coverings. It is one of several specialty dining options on the ship. Later this winter, the company will begin a new initiative investing more than $100 million annually in the food and beverage experience on all of its ships.

The ship will feature the first sustainability-focused cocktail and wine bar with zero-waste preparation for each drink. Beverage ingredients use materials that are normally discarded like coffee grounds and banana peels. There’s even a “croissant Mai Tai” cocktail. Norwegian will also begin bottling its own cocktails on board for to-go enjoyment. Coming later this year is the company’s first private label, bio-dynamic and sustainable gin on board.

Are there new attractions on board?

It’s hard to miss The Drop, the winding slide that dangles off the side of the ship. Many guests also enjoy walking the circumference of the ship, and Ocean Boulevard wraps around the ship giving them up close views of the ocean. There’s also a three-level racetrack for the adventurous to zoom around the ship.

Spa goers will find new fitness and spa amenities on board including the first charcoal sauna at sea to boost circulation and metabolism as well as a two-story cascading indoor spa waterfall. Like other ships, the thermal spa area will also feature heated lounge chairs, an ice room and flotation salt pool among other services. This space is in the front of the ship providing panoramic views; the fitness center has also been moved to the front of the ship.

New to the spa menu is the Welnamis bed, which uses computer-controlled acoustic and vibrational therapy to ease the brain into deep relaxation. Norwegian Prima is a game changer for the company and the industry, and now is the right time to launch such an exciting product as the travel rebound begins.

On the Spot: Ikaruna | Displate Blog

Mon Aug 1 , 2022
Thea Magerand, aka Ikaruna, feels right at home among Nordic runes, mythical creatures, and cryptic symbols. In her art, this digital illustrator and book cover artist merges fantasy worlds with a touch of realism. Ikaruna collaborated with Displate on our latest Limited Edition – the mighty “Ragnarok Is Coming”. That’s […] 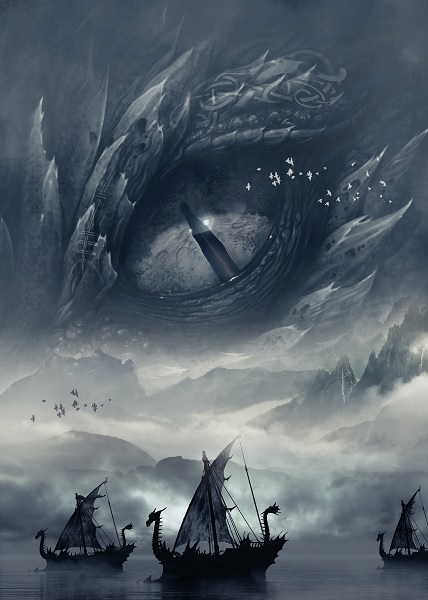