The Allison Gallery at Tusculum University is featuring works of this year’s graduating art students during the month of June.

The art pieces can be viewed by the public free of charge on Mondays, Tuesdays and Wednesdays, from noon to 3 p.m., at the gallery, which is located inside the Shulman Center, next to the Pioneer Park baseball stadium.

Retired Tusculum art professor Clem Allison, who is the gallery’s namesake, said he was extremely pleased with the type of works that the art program’s students are producing. “It’s enjoyable to see how things are continuing to develop and progress” with the art program at Tusculum.

William Bledsoe, who has served as an art professor within Tusculum’s Art and Design Department for the past six years, says this was the largest number of graduating art students that he has seen during his time at the university.

“We had seven graduates in all, and the group of students and their work reflect the best of what our Studio and Digital Art Department has to offer,” Bledsoe said.

Two were international students. Hansen is a citizen of Denmark, and Gongora is from Spain. Just prior to their graduation this spring, the pair held a joint student art exhibition on May 5 at the Allison Gallery. Family members of both students, who had traveled from Denmark and Spain for their graduation, were on hand to view the exhibition.

Hansen earned her BA with a double-major in art and business and a minor in web design. When she first came to Tusculum from her native Denmark she said was committed to studying business.

“I would have never thought about being an art major,” Hansen said.

However, after taking an art class she was hooked. She now wants to incorporate her business knowledge and art skills into a career as a web designer.

Hansen said she appreciated being exposed to various forms of mediums during her art studies. “My favorite was watercolor,” she said.

Gongora, who is from Málaga, Spain, which is the birthplace of famed artist Pablo Picasso, attended Tusculum on a soccer athletic scholarship. He double majored in museum studies and art.

“I have always enjoyed drawing from a very young age, but I had never fully developed my skills until I attended Tusculum University,” Gongora said.

During his studies, Gongora said, he was assigned “multitudes of master variations, in addition to studying other mediums such as sculpture, painting, photography and graphic design. This process helped my drawing skills and increased my interest in portraiture,” he added. His drawing of “Mr. White” from the TV series “Breaking Bad” was one of the pieces included in his senior capstone project.

Gongora also included drawings of two of his TU professors, Bledsoe and Lanna Mondy Emmett, who serves as the program director and head of the digital media program.

Bledsoe explained that “each student is required to exhibit a one-man art show that serves academically as a capstone, which includes 16 works of art, of which eight works are defined as a directive. This directive must have a theme and each piece of work must be cohesive in the directive regarding subject matter, medium, content and theme.

“The remaining eight works must reflect the various mediums and projects that each student develops and produces in all art courses taken, whether or not it is related to their directive,” Bledsoe continued.

“All students must show a command of drawing, painting and design regardless of their initial aptitudes and capacities,” he added. “It is imperative that all Tusculum University Art Graduates can demonstrate a measure of excellence and professionalism in all matters of visual art (drawing, painting, sculpture 3-D, photography, graphic design and digital media) regardless of their personal preferences and artistic goals.

“Content is the centerpiece of every project and must be apparent in all works exhibited,” Bledsoe said.

“This year’s graduates clearly demonstrated all of these requirements and upheld the standards that our department required of them,” Bledsoe added. “They are a shining example of what a BA student of Tusculum University should be.”

The first graduate of the school year was T.J. Minton, who graduated from the arts program in December.

Minton’s directive was “a collection of cityscape paintings appropriate for children’s book illustration,” Bledsoe said. “The subjects of his directive were accumulated from plein-aire painting excursions on a University Europe trip to Magdeburg, German during his sophomore year.”

Studio art major Carli Pigza, who earned her BA this spring, says she is planning to continue higher-level studies at Tusculum to earn a master’s in art education.

“My directive for my senior art show is animal portraiture,” Pigza said. “I have eight different 12×12 colored pencil animal drawings. My style of portraiture is about being realistic but also capturing the likeness and personality of the subject.

“I feel that is how you truly make something realistic,” she continued. “This became most popular with romantic and impressionist portraiture. Artists such as Titian, DaVinci, and Matisse were known for this.”

Pigza said she was especially grateful for the multiple art history classes that she took at Tusculum. “These classes included Intro to Art, Ancient Through Renaissance Art, and Baroque Through Modern Art,” she said. While Pigza said she learned the most from those classes, her favorite classes were the hands-on ones, such as drawing, painting, sculpture and printmaking. “These classes helped me to improve my skills as an artist,” she said.

Graphic design major Jared Rowland, who also graduated this spring, is currently working on a novel and illustrating it. His senior capstone centered around this novel.

“I was able to make illustrations for the characters in my book to present at my show,” Rowland said. “These pieces were made first by sketching them out on paper and then uploading them onto a computer and adding color and shading. Thanks to my professors I was better able to create these pieces to the standard at which I wanted them to be at.”

Rowland credited his art professors for helping him to gain “a lot of real-world experience” around his field of study and for assisting him with his novel.

Art major graduate Aaron Fudge said when he decided to pursue an art degree at Tusculum, he was initially unsure as to the direction he would take as it pertained to a preference in medium.

“I enjoyed taking photographs, but there were several options to consider in both graphic design and or studio art,” Fudge said. “The program required that I enroll in various art courses regardless of my directive. This included painting, drawing, sculpture, printmaking and graphic design, along with photography.

“Although, I was initially uncomfortable with working in mediums outside of my ‘zone,’ I learned to exhibit competency in all of these courses including standard requirements such as Color Theory and Basic Design,” Fudge said. “Unknowingly at first, I realized that the exposure to various forms of art and the study of Art History which was a part of every class including photography, expanded my ability to compose credible art photographs.”

He went on to add that his arts professors “consistently enforced efficiency and knowledge regarding digital technology as it pertained to the production of photographs and artistic content which identifies my signature as an artist.

“Mr. Bledsoe preached faithfully that, ‘if you don’t have content, you don’t have Jack!’ He is clearly ‘old school’ and this motto is a part of my college experience that I will never forget,” Fudge said. “It has been a predominant disposition of Mrs. Emmett and Mr. Bledsoe that all of their students have the tools and skill they need and the ability to create credible artwork to make their way in the world regardless of their future plans be it continued education or working in the field of art. I am grateful for their mentorship, patience and encouragement.”

Kaitlin Irvin, who graduated this spring with a degree in visual communication design, said she feels that she received a “well-rounded education in almost all aspects of art” at Tusculum.

“From digital to studio, graphic design and photography to painting and sculpture, I was taught of the many ways to advance my skills and grow my passion with art,” she said.

“With the small school ratio of students to professor, it was a very unique and helpful experience to get one-on-one specialized help whenever it was needed,” Irvin continued. “I thoroughly enjoyed my time with the art department and will forever be a part of that family.” 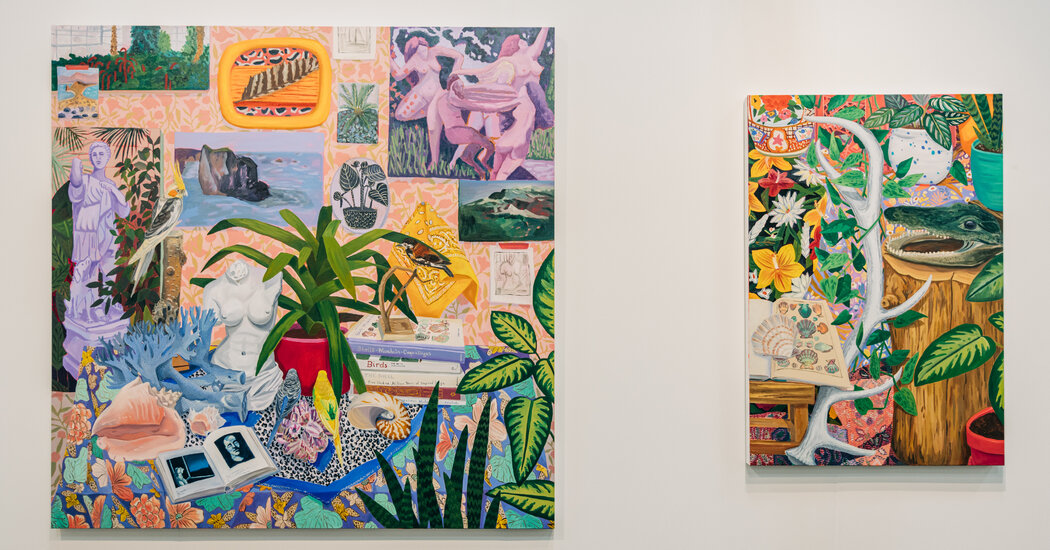 At NADA, a Glorious Collision of Paintings and Ceramics