After a two-year hiatus, the European Fine Art Fair, or TEFAF, has returned to New York’s Park Avenue Armory. It opens to the public today and runs through May 10.

This is the first in-person TEFAF fair since the March 2020 event in Maastricht, the Netherlands, which was held just before the coronavirus outbreak shuttered most cultural gatherings. More than 91 galleries from 14 countries have shown up in New York, and all intend to impress, too, with blue-chip offerings of modern European and contemporary art. London gallery Dickinson is presenting “Visible and Tangible Form,” an eye-popping exhibition of Bauhaus, Op art, and Concrete art, and Vedovi Gallery from Brussels brought a standout embroidery work crafted by Alighiero Boetti alongside Afghan artisans. But these were just two highlights among many.

Antiquities and Old Master paintings are what TEFAF is best known for, though these have largely taken the backseat. One exception comes at the booth of Paris’s Galerie Bernard Dulon, which stands out for assembling the fair’s first-ever offering of classical African art. Meanwhile Roman mosaics and carved marble statues enjoy the flattering low lights of the Armory’s stately second-floor galleries.

Below, a look at the seven best offerings at the fair. 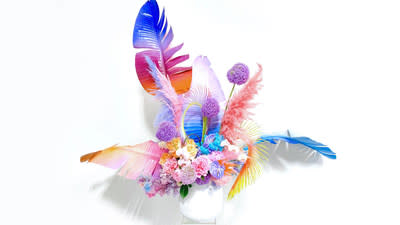 Karla Knight on living with the unknown