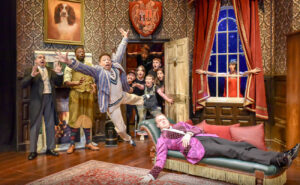 Here’s the thing. On paper, Mischief’s The Play That Goes Wrong might not sound like much. A (fictional, hopeless) polytechnic drama society puts on a sub-Mousetrap period murder mystery play, and, um, it goes wrong. Ha bloody ha. If you’ve never experienced it, though – either in its original form or in assorted spin-off productions, tours with new casts and the TV version, The Goes Wrong Show –  be assured that it’s actually uproariously funny.

What elevates it way beyond the basic idea is that, for one thing, it raises toe-curling theatrical accidents into something like a fine art. Things go wrong constantly and they’re staged brilliantly, timed and choreographed to perfection. For another thing – and this might be the real master-stroke – the players aren’t just cipher-like amateurs. The cast are all playing well-drawn, relatable characters, who are themselves playing inspectors, flappers and servants (badly). It’s been observed before, but the joy of Goes Wrong is that at heart it’s actually about the drama soc members, their hopes, dreams, relationships and, well, limitations, told through the medium of slapstick farce and thereby lending a whole layer of extra depth to it. 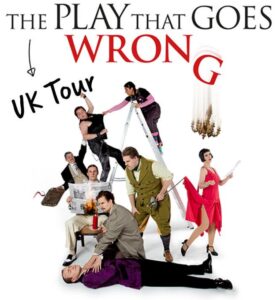 That’s also why this current tour, now at Manchester Opera House, is such a delight. Off the back of the TV show, not to mention some fine online improvised shows during lockdown, this brings the original cast, the founders of Mischief, back to their original 2012 show. It’s not quite David Tennant coming back to Doctor Who, but nevertheless it gladdens the heart to see them. On arrival on stage, the likes of Henry Lewis, Dave Hearn and Henry Shields are treated to thunderous applause like conquering heroes, to their own evident delight. Also, they know precisely what they’re doing with this material and could probably knock each other out or hang off a broken lighting rig in their sleep.

The show is highly polished, then, and thoughtfully structured. It ebbs and flows from set piece to set piece, peaking with uproarious routines and building to a giddy, dazzling climax. Unlike the TV incarnation, it allows for interaction and, as the cast are all well-versed in improvisation, this makes for some dazzling moments. There’s no sense of them going through the motions, either: it’s delivered with genuine gusto. (A word here in appreciation of the fact that there are inventive little touches when the comedy reaches out beyond the stage itself – and an accompanying word of apology to anyone in the Opera House audience on the night who witnessed Northern Soul moving from the wrong seats not once but three times. We really weren’t part of the show, honest.)

On the face of it, then, there’s an investigation into nefarious goings-on at Haversham Manor, where everyone assembled is a potential suspect. The fictional ‘players’, of course, think they’re delivering serious drama and are appalled that the audience keeps laughing. Like Fawlty Towers, then, the show is whip-smart but wears it lightly, channelling an impressive degree of skill and intelligence into the business of having fun. The Play That Goes Wrong is precision-built to make you laugh, and my word it does. You’re unlikely to hear so much laughter, plus near-constant applause, in a night at the theatre. The whole thing’s an utter hoot, and in these strange times, hooray for that.

The Play That Goes Wrong is at Manchester Opera House until June 4, 2022, and tours thereafter to venues including Hull New Theatre, Sheffield Lyceum and Theatre Royal Newcastle. For more info, follow this link: www.mischiefcomedy.com/theplaythatgoeswrong-uk-tour/uk-tour/tour-dates 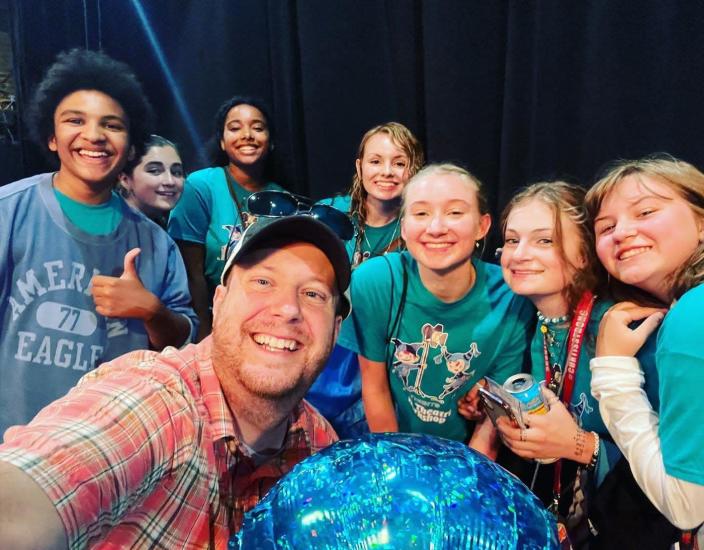