The week in theatre: Britannicus; Tony! (The Tony Blair Rock Opera); The Haunting of Susan A | Theatre 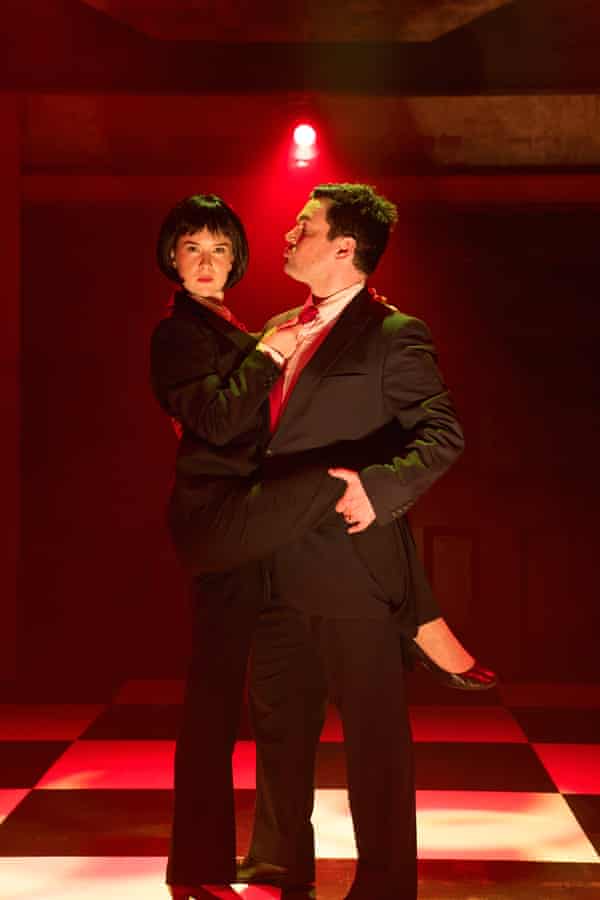 When Jean Racine wrote Britannicus in 1669, he was governed by the French classical idea that required a play to occur within real time, in a single place, during the course of a day. But for a modern audience, and even with the redoubtable Timberlake Wertenbaker as translator and adapter, Britannicus proves a static rather than a vividly unfolding drama. Wertenbaker has shortened the text but is still necessarily involved in stodgy catchup explanations that stall progress. Director Atri Banerjee does his ingenious best to meet all challenges intrepidly, but until the ending, action is so scant that when Nero has a tantrum two-thirds of the way through, and relieves his feelings by hitting the office water cooler, it is a high point. At worst, the experience of watching the play is like driving with the handbrake on.

Britannicus is really Nero’s story: a day in the life of a despot. And there are some great performances here: William Robinson is excellently cast as the Roman emperor – he strolls around in white tracksuit bottoms, with bare feet, as if on a casual power trip. He has a way of gaslighting others for laughs to underpin his own control freakery, and given the sobriety elsewhere, you are grateful for the calculated entertainment this affords. The play focuses on Nero’s relationship with his tyrannical mother, Agrippina. Sirine Saba fiercely communicates her sense of having been neglected by her son (Racine’s maternal power play is in interesting contrast to that other Roman pair: Shakespeare’s Coriolanus and Volumnia).

Britannicus’s role is slight, but Nathaniel Curtis (recently feted for Channel 4’s drama series It’s a Sin) brings to Nero’s adoptive brother a gentle giant’s charm and proves plaintively outspoken. Shyvonne Ahmmad is outstanding as his behrothed, Junia, a small figure in burgundy taffeta who has recently been abducted by Nero. Given an audience with her beloved Britannicus, she exclaims: “I want to save you”, and both her feet leave the ground as she jumps up to try to equal her lover’s height. Through her desperation, Ahmmad brings to the production an urgently needed emotional centre.

Rosanna Vize’s set is divertingly strange, with a detail from Paul Rubens’s Romulus and Remus suckled by a wolf as its arresting backdrop – and an actual stuffed wolf reclines on stage throughout. The final wedding scene is impressively and appropriately funereal. Instead of confetti, cinders fall steadily in front of a single graffitied name scrawled in black: NERO.

At the Park theatre, another name, in red capitals, hangs above the stage: TONY! It is a timely moment to be considering what makes a disastrous prime minister, and comedian Harry Hill and composer Steve Brown’s Tony! (The Tony Blair Rock Opera) is a new, fresh, multitasking musical, exuberantly directed by Peter Rowe. The set (designer Libby Watson) is in New Labour colours and the cast wear black suits and scarlet ties. Blair is played by Charlie Baker with engaging cheesiness and an ingratiatingly asinine smile. What makes his performance disarmingly hilarious is that he presents Blair as a dolt and not free of self-doubt – a wannabe rock star who waddles about obsessed with Mick Jagger (whose surname he consistently gets wrong: Jaggers). Cherie (Holly Sumpton) is a risque floozy of whom Tone is distinctly scared.

Do not expect subtle political analysis here as Blair’s decade in power is retraced – and be braced for weapons of mass destruction doubling as effortless gags. But Hill is on to something, as this simple exchange reveals: Tony: “The people like me, Gordon.” Gordon: “That’s because they don’t know you.” Gary Trainor is spot-on as brooding Gordon Brown, singing about macroeconomics. Howard Samuels is deliciously slippery and camp as Peter Mandelson, Rosie Strobel is a tremendously musical Osama bin Laden and Madison Swan an entertainingly demure Princess Diana (“There were three of us in our marriage, seven if you count all the blokes I got off with”). Steve Brown’s music is hearty, mixed fare, from Sondheim to ragtime – and the final number, The Whole World Is Run By Assholes, is rousingly magnificent.

With a ghost in the offing, there can be little doubt who to blame when the lighting rig suddenly proves to be unsafe, as it did the night I saw Mark Ravenhill’s short and splendidly written new play The Haunting of Susan A. The technical hitch at the King’s Head, where Ravenhill is co-artistic director, meant that the show, a two-hander, went ahead late, under an unflattering classroom glare. Ravenhill, who acts in the show, tried to offset this with the aid of a mobile phone whenever he was plunged into darkness. But these problems barely signified in what turns out to be the story of a space: a precise haunting within a pub theatre that was once, it was fascinating to learn, a bare-knuckle private fighting club.

The feel of the production, co-directed by Iman Qureshi, is of premeditated improvisation, of rehearsed spontaneity, as Suzanne Ahmet pretends (not altogether convincingly) to be a random, protesting audience member who snatches Ravenhill’s narrative reins and goes on to tell, with fine urgency, the tale of a Victorian mother who tapped on the shoulders of actresses, attempting to seek help she was doomed never to receive. It is the most pleasing chiller – affecting too – and well worth putting an hour aside to see.