A “rock opera”? I don’t think so. I recall some years ago attending a student production of The Who’s Tommy at the Royal Academy of Music, in which the audience was offered ear plugs, free of charge, such was the production team’s concern that their commitment to cranking up the volume might result in a listening experience too uncomfortable for patrons more used to – well, performances that aren’t rock operas. This might be better described as a ‘musical comedy’, though to be blunt, even that is a bit of a stretch. 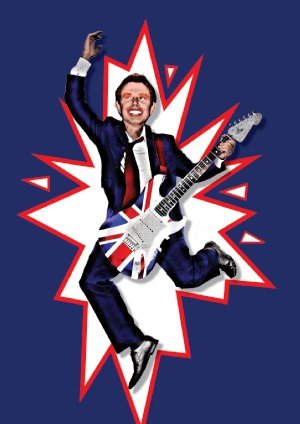 Rather bizarrely, Tony Blair (Charlie Baker) is portrayed as someone who is closer to Gordon Brown (Gary Trainor), in the sense that he gets to be Prime Minister and First Lord of the Treasury without actually hitting the ground running and pursuing an agenda (whatever that may be). But one doesn’t lead a party of any colour to three consecutive General Election victories without knowing what one is doing, and so the assertion that Blair was a bumbling nice-but-dim character is rather inept.

This version of Blair, however, does allow the production to attempt to play for laughs – if he isn’t President George W Bush’s ‘poodle’ (the word isn’t, to the best of my recollection, used in the show), he is otherwise being manipulated not so much by Alistair Campbell but rather by Peter Mandelson (Howard Samuels). That is, until a heckler (Charles Angiama) points out that Mandelson couldn’t have been part of the Downing Street spin machine at a certain point in the narrative, because he had been forced to resign from the Cabinet months before.

As with Harry Hill and Steve Brown’s previous show, I Can’t Sing! The X Factor Musical, the jokes and punchlines aren’t particularly edgy. There are a few moments in which the audience reacts with something approaching shock, but this was related to the subject matters being brought up in a ‘comedy’ (inverted commas mine), rather than the way in which the subjects were approached. The script even references “the theatre’s legal team” – whoever they may be – in Blair’s response to a question about why he chose to word a statement in a certain way. The show was never, at least to me, offensive: perhaps it ought to have been, or at least tried harder. There have been, for instance, some objectionable remarks made by comedy acts in recent years, and in the end, as far as packing in the laughs goes, it is better to be provocative than to be unfunny.

A posthumous Princess Diana (Madison Swan) moans about how awful her statue in Kensington Gardens is. Neil Kinnock (Martin Johnston) took the audience back to the Sheffield Rally in 1992, though not quite with the same pomp and circumstance of that event. As for the show as a whole, most of the musical numbers are unmemorable, apart from the opening and closing numbers. The latter makes an emphatic assertion about who runs the world (not, as Beyoncé would have it, girls) which is difficult to disagree with, and the show’s candidate for the world’s worst political leader largely went down well with the audience, with the current political climate being what it is.

Blair – or, rather, this version of Blair – has to remind miscellaneous other characters at one point that it is meant to be a show about him. The production can show insight when it wants to, and there’s something to be said about the near-constant jostling for power, as well as the many people it takes to deliver a manifesto. Or, indeed, not deliver it. The style of humour is far from everyone’s cup of tea – some in the press night audience chortled almost incessantly, whilst others remained stony-faced. Your reviewer was somewhere in the middle: there were elements of hilarity, but I was otherwise unamused. Perhaps the show needs a bigger stage, and a bigger band. Still, an energetic and hard-working cast did well to maintain interest throughout the evening.

Making a Living as an Artist: Considerations for Going Full-Time

Fri Jun 10 , 2022
[ad_1] Many artists bristle at the thought of being confined by a clock or calendar. After all, freedom is, presumably, one reason you have chosen the artist’s life.  You can be as free as you want in your studio, but once you decide you want to be part of the […]