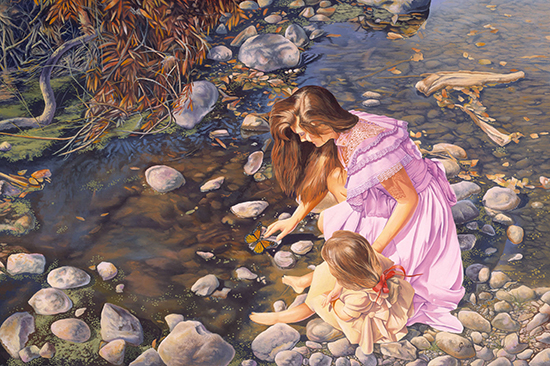 We know Graeme Stevenson primarily from his very successful, award-winning television series, Colour in Your Life. Stevenson has traveled internationally to interview artists and show their work and lives to his large world-wide audience. (Graeme visited us in our studios here to film a segment on John’s work in 2018.) Colour in Your Life has been filmed in seven countries and is syndicated on television networks in over 50 countries. In his goal to preserve the work of artists for future generations to enjoy, Stevenson had collaborated with Dr. Samuel Paralta (who is working with NASA and SpaceX) to have all episodes of the show included in a SpaceX Lunar rocket that will take them to the moon.

285 full-length Colour in Your Life episodes—representing every season plus special editions—have been loaded into the Lunar Codex, which is currently being ingested into a NASA time capsule as part of The Polaris Collection. This capsule will be launched to the lunar surface in November 2023 as part of the NASA VIPER Rover mission. The probe will land at the South Pole of the Earth’s moon, where it will be stored in a DHL MoonBox or a “Museum on the Moon,” and remain there forever.

Because of his hard work on behalf of the arts and his charitable work, Stevenson was awarded the Medal of the Order of Australia (OAM), one of the highest honors given to an Australian citizen.

We asked Grame to write to us about his personal artwork, his life growing up in New South Wales, Australia, his processes and inspirations and the intricate themes behind his monumental painting, The Truth. 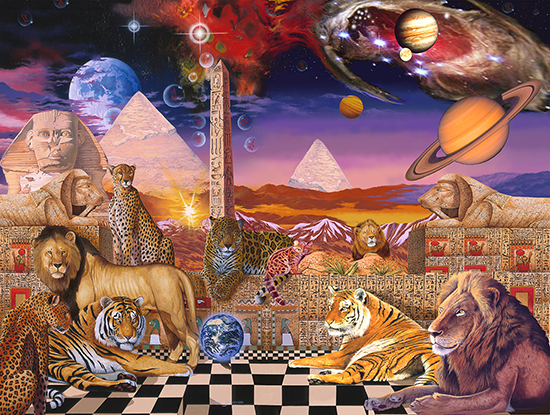 Red hair and freckles gave me a childhood that was a little separated from most. I learnt what bigotry and intolerance were at an early age—simply because somebody has freckles doesn’t mean there is something wrong with them, let alone skin colour or sexual orientation.

So, I spent a lot of time wandering in the bush and exploring and studying the native animals and fauna. I bred native parrots, until some lowlife broke into my aviaries and killed all my birds. I lost about 50 precious birds that day and was distraught that I would have to put all these birds in the ground. My attitude in life is that if life gives me lemons, I will work out a way to make lemonade.

I was just nine at the time. So, I decided to phone the local science labs to find out if anyone did taxidermy in the area. There was a German gentleman called Professor Hans Dimple that worked at some labs about 25 miles from where we lived in Canberra, (the Australian capital). I had a Gold Malvern Star bike in those days. I made the ride every Saturday to the labs and learnt how to do taxidermy. Mum and Dad encouraged me in all ways to do my art and lead an inquiring life as much as I could.

It was about this time after I had mounted many of my dead birds, that I found that I could use them to study for my art. Much to my mum and dad’s horror, the downstairs section in the garage turned into its own lab and I began to mount all types of creatures over time. It was great to study the skeletons and muscles of all of these animals—mind you I never killed any animals to do this—lots of roadkill. As people knew I could do this, I got all manner of animals dropped on the door. So I pretty much started my art journey with wildlife and learned how special the natural world is and how important it is for all of us to survive.

My first influences were two ladies and a man from England. The ladies were my grandmother and a lady who was a top landscape artist and a gentleman who was a leading wildlife artist from the UK called Raymond Ching. Raymond was a super realist artist and his work was mind bogglingly good. As I got older, I tracked down Raymond in England and became friends and learnt so much from him in the time I spent with him. 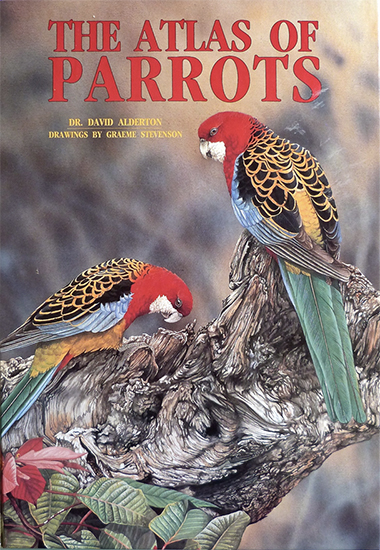 In 1988, my work with painting parrots was noticed and a company in America approached me about illustrating what would become one of the largest books on the species in the world. My taxidermy was a great help in putting the book together and I studied intensely on all the species across the world. It took me a total of 9,000 hours to complete the book. It is seen in many natural history museums around the world. 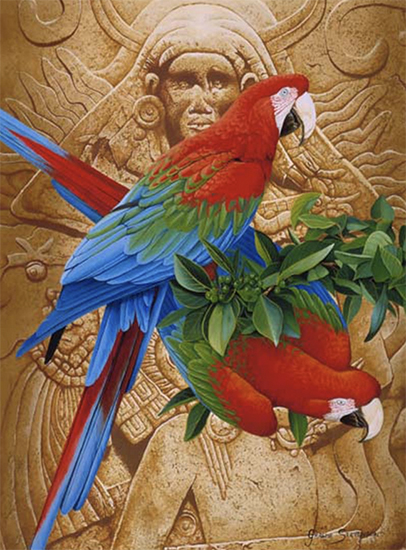 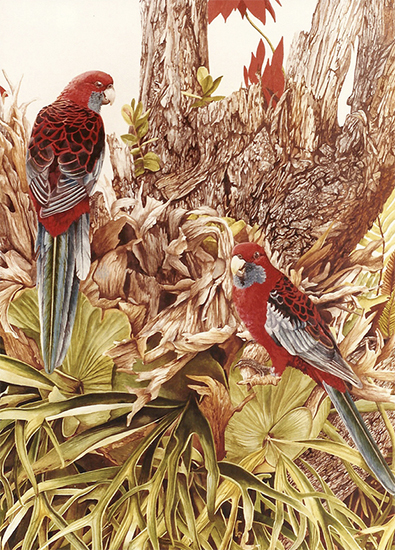 I currently work mostly in the studio as a lot of my work is conceptual. I often do a word association with the structure of the idea and do a draft sketch in case I need to change anything.

What I like to do most of all is to create pieces from my mind. I am creating a piece for a client at the moment that is based around the CIYL journey to the moon, very exciting ideas filled with ancient ruins and time images. 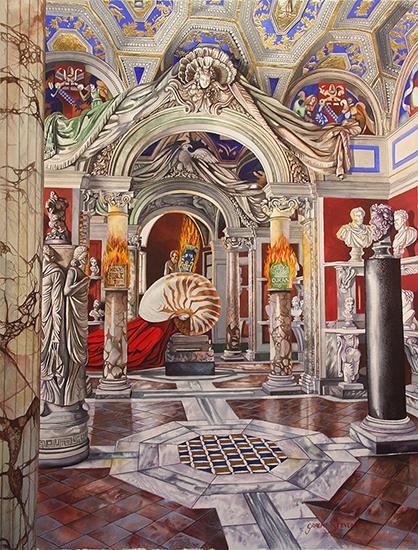 Put Some Colour in Your Life came about because of the kindness of somebody else. My best friend in Santa Rosa who helped me out a great deal when I lived in California, asked me to pay it forward, when I had a chance. About ten years after that, I came up with the idea of CIYL. I had been doing TV for a while in Los Angeles and CIYL was a natural transition. There is a lot involved in the process of putting it together, I can assure you.

I tend to work in the studio and love to use my imagination and science and history to help me tell the story. I would say that The Truth has been a cornerstone piece for me thus far. This painting is about my personal truth—a truth, for me, that is based in science. It follows an evolutionary journey that enables us to precisely define who we are as human beings—our biology, our history, even our morality. Inevitably, I believe the light that shines from scientific awareness leads us to question the fundamentals of the world’s religions, basic untruths that seek to avert our eyes from the truth.

The major theme of the painting is the evolutionary tree of life. The Truth honors the legacy of many great men such as Eratosthenes, Charles Darwin, Leonardo Da Vinci, Edwin Hubble, Isaac Newton, Leonardo Fibonacci, Kenneth Miller, Frank Drake and Stephen Hawking.

It dissects the origins of the world’s foremost religions by interpreting ancient astrological traditions passed down from Egyptian pharaohs.

It examines the transitional evidence of fossils and sedimentary layers. It respects the clarity provided by genomes and mitochondrial DNA and it embraces the Hubble space telescope for the light that it shines on distant galaxies.

There are many scientific truths that have their origins in early civilizations. In ancient times, men of science did exist. 350 years before Christ was born, Eratosthenes, an astronomer, geographer, philosopher and mathematician, came to the realization that the Earth was round.

The Golden Mean (or ratio) is an irrational mathematical constant, approximately 1.6180339887 that has been adopted by many artists and architects in the proportions of their works and studied by many mathematicians for its unique and widespread properties. This is a universal number, which many believe is a design basic of Egyptian Pyramids and attributable to the dimensions of the Greek Parthenon. It is also a  number, which has been shown to be applicable to all living creatures, plants, animals and birds…even whales and humans.

In the 12th century Leonardo Fibonacci was a sophisticated mathematician famous for applying practical mathematics to challenges. It led him to develop the famous Fibonacci sequence in which each number is the sum of the two preceding numbers. This sequence has proved extremely fruitful and appears in many different areas of mathematics and science.

Many of these scientific discoveries were stifled by religious leaders and ignored by the church.

My own background was in the Catholic Church, but my questions (which led to my atheism) also led me to investigate the evolutionary processes that have formed the earth. I think that Charles Darwin is one of the most influential human beings that has ever existed because he told us our place within the universe and the planet in scientific terms. When I look to the heavens, I am thankful for Edwin Hubble, and others like him, who brought us the advent of modern cosmology and the means to visually access 150 billion galaxies and the 400 billion stars that exist in our galaxy alone.

I believe we are rapidly reaching the point in our evolution of consciousness where we need to become more aware and more accountable. We need to see the truth, through the evidence. The truths of evolution, along with many other scientific truths, are so engrossingly fascinating and beautiful. The time has come to recognize this and to unite as one. It is becomingly increasingly clear that the world’s biodiversity is imperiled on a scale unmatched for millions of years. As forests are cleared, oceans acidified, diseases spread, and the atmosphere warmed, many species face serious threats to their survival.

The universe beckons. The truth is out there. Are we capable of uniting our collective conscience to embrace our dreams and hopes in science? 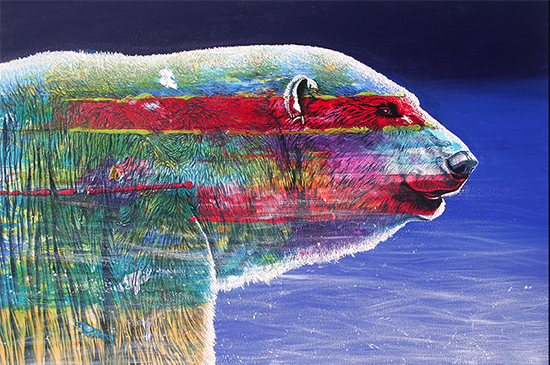 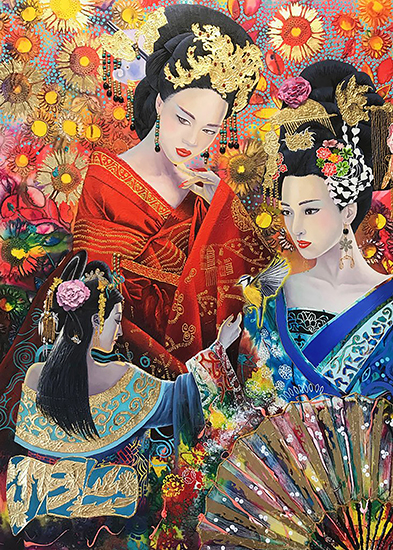 Do you have any inspiring words you would like to pass along to beginning artists?

That’s the thing about inspiring words. They are just words and won’t build any bridges for you or blaze any trails.

If you want success in your life, (and you’ll still have to work out what success will mean to you in your own life anyway), don’t wait around for somebody else to make a move. Knowledge and education are the key factors in getting where you want to go in life. Learn as much as you can as often as you can, and you won’t need any inspiring words. You will be the one that changes other people’s lives simply by your actions and not your words.

And, finally, just for fun, if you could sit down for a long conversation with an artist from the past, who would it be?

Over the years I have tracked down many of the world’s contemporary artists’ homes and work and locations. It was so fascinating to find the scenes that Van Gogh painted in the south of France and of course visit Monet’s home. If I had my choice to sit down with somebody from the past, I’d say it would have to be Leonardo.

Like Leonardo, I use my knowledge of science and history to create ideas and images that make the viewer question what they know. I have often gotten into debates with people about religion and society and how it all maps together. Once again, the reality of fact over belief can be very confronting for people. I fear that it will eventually lead to the demise of the species. All creatures eventually go extinct, I don’t think we will be any exception. 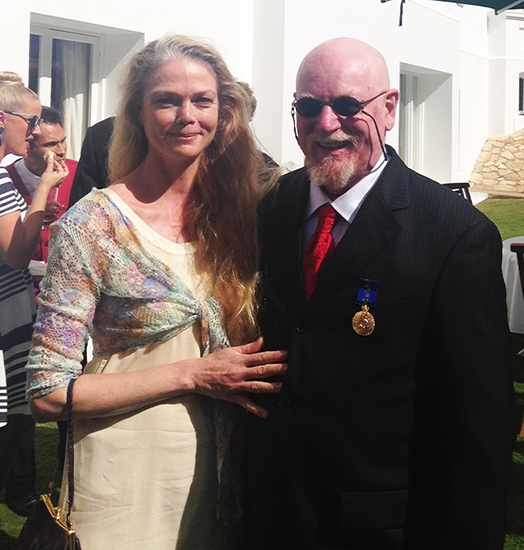 (Left:  Graeme Stevenson and his Partner, Jo, at the OAM Awards Ceremony.)

Mon Apr 18 , 2022
When Christie’s Auction House first entered the secondary art market of mainland China in 2005, it licensed its brand to a local auction house and received a total of RMB 97,000,000 (roughly $12,100,000) for its inaugural sale.[1] With eight years of experience in this nascent market, Christie’s started its independent business […]