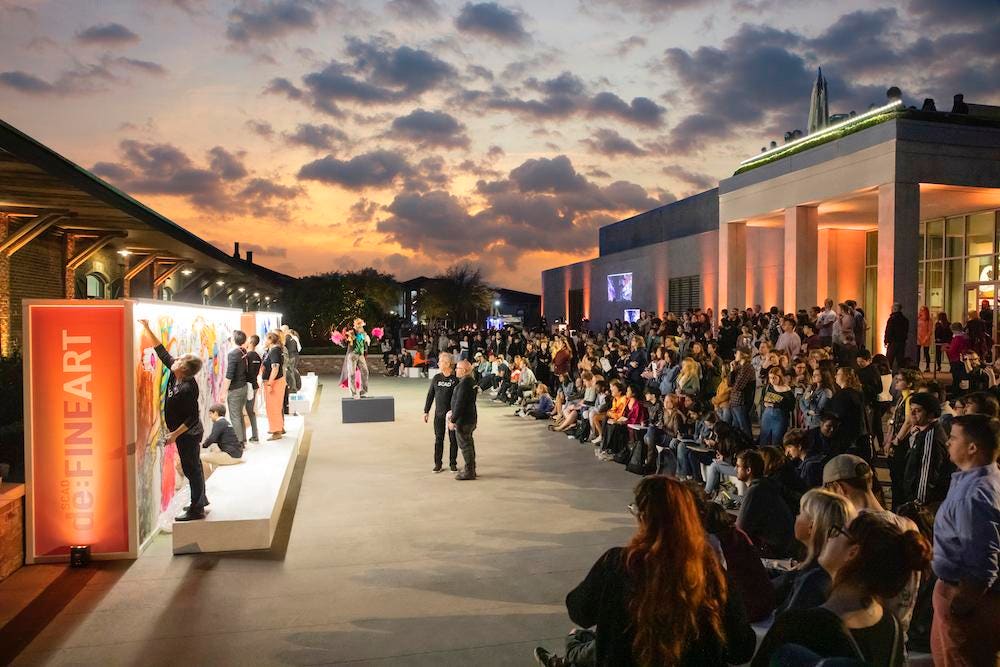 Last year was a difficult year to be a creative professional, to say the least. In August of 2020, the Brookings Institute released a survey that estimated that 2.7 million jobs were lost in creative industries due to the pandemic. In total, these losses accounted for roughly one-third of creative jobs. In order for these jobs to recover, the Brookings Institute suggests that there will need to be a coordinated and long-term effort between municipal, state and national governments, as well as philanthropists and cultural organizations. In other words, the recovery, if it happens, will not be fast.

Given these predictions, it may seem a foolhardy time to enroll in a school that prepares students for professions in creative industries, such as the Savannah College of Art and Design (SCAD). Even still, says Paula Wallace, the President of SCAD since 2000 — she founded the university in 1978 with three other people — past, current and future students at SCAD will thrive. “We’re nimble, flexible,” says Wallace. “Like the slender, sturdy, towering palm trees of our Georgia coast, we withstand occasional storms—like the coronavirus—with grace and strength.”

Pretty rhetoric aside, if the university does continue to thrive, it will be because Wallace herself is an absolute force of nature—and an exemplary model for how creative women can build a business empire. Since she became President of SCAD in 2000, Wallace has tripled the university’s enrollment from 5,000 to 15,000 full-time students, as well as expanded the university’s reach to include locations in Savannah and Atlanta, Georgia, and Lacoste, France. During her tenure as President, Wallace has also founded three teaching museums connected with the college, including the SCAD FASH Museum of Fashion + Film in Atlanta, SCAD Retour en 1856 in Lacoste and SCAD Museum of Art in Savannah. The latter is a world class institution of contemporary art, which in 2021, will host exhibitions by Sanford Biggers, Marcel Dzama and the Haas Brothers, to name just a few artists.

One needs to merely walk around the city of Savannah, which was founded in 1733, and famously preserved from burning by General William Tecumseh Sherman at the end of the Civil War, to see the impact the university has on its location. Residents will tell you that before SCAD opened — to date, the institution has renovated 70 buildings in downtown Savannah — the city was so derelict and abandoned that you could drive cars through the center of its 24 planned squares. Today, the squares are manicured and flowering, and the city’s historic buildings are more gorgeous than ever. Even more remarkable, there’s a sense, walking around the main drag on Broughton Street, that Savannah has a diverse, LGBTQ+ friendly, international, progressive population that may very well be indicative of the direction Georgia, and the American South in general, may be headed in the 21st century. That population, of course, is due at least in large part—if not entirely—to SCAD.

The typical trappings of art school belie SCAD’s saavy education model, which breaks down the traditional semester model into four 10-week quarters. Doing so provides an education that is more “professionally-paced,” notes President Wallace. Although the university awards traditional fine art degrees in painting and industrial design, it also offers majors in the Business of Beauty and Fragrance, Design Management and Creative Business Leadership, among other more business-focused disciplines. This is a marked difference from other top art schools such as the Rhode Island School of Design (RISD), which strictly awards degrees in traditional modes of making including interior architecture and apparel, for example.

Students at SCAD are also offered an array of access to courses that teach financial literacy, from Introduction to Economics, to Principles of Marketing and the Design of Business. This, coupled with certification programs in everything from three-dimensional modeling to green architecture, prepares students not merely to follow their passions, but also to work in the real world. Indeed, 99% of recent graduates of SCAD report being employed, pursuing higher education, or both within 10 months of graduation. “SCAD is more like a world than a school,” says Wallace. “Our mission, our curriculum, every resource, every lesson and lecture are devoted to the demands of professions and requirements of clients.”

Recently, President Wallace has focused on providing support for alumni. In 2015, President Wallace launched the SCAD Alumni-Atelier, which provides 10-week long residencies — called ambassadorships — to former alumni. Thus far, the program, which is endowed by President Wallace personally, has disbursed $900,000 in funds to 60 alumni. Past ambassadors of the program include Madison Hamburg, the director of HBO’s docuseries Murder on Middle Beach and Kacie Willis, the founding producer of the podcast Could Be Pretty Cool. The university has also set up a number of different programs to aid former students as they embark on careers, including SCAD Art Sales, which connects alumni with collectors around the world, and SCADPro, which connects students and alumni to Fortune 500 companies including Google and Coca-Cola.

In recent months, economists have talked about the economic recovery ahead, and many have noted that despite continuing unemployment, and a surging COVID-19 caseload, now may be the ideal time to start a business. Traditional modes of conducting business, especially in industries such as hospitality and travel, have collapsed due to shutdowns, leading a vacuum for innovative, smart people to fill with their ideas. Indeed, a record number of small business applications were filed in the third quarter of 2020, according to data analyzed since 2004 by the Census Bureau.

It’s easy to see how SCAD students may be uniquely positioned to shape the way that creative industries function in the decades to come, especially with President Wallace as a model. She built a world-class university in a sleepy Southern city. Following her lead, what can her students accomplish?

“Each year—each moment, really—SCAD evolves to perceive and address the needs around us, ahead of us,” says Wallace. “And we will also continue to be true to our mission.”

Inside the special house, with a royal suite and stunning art works

In Scena! Italian Theater Festival: EXILE, by and with Alessandro Tampieri