Essential Arts: The U.S. Capitol’s architecture at the center of an insurgency 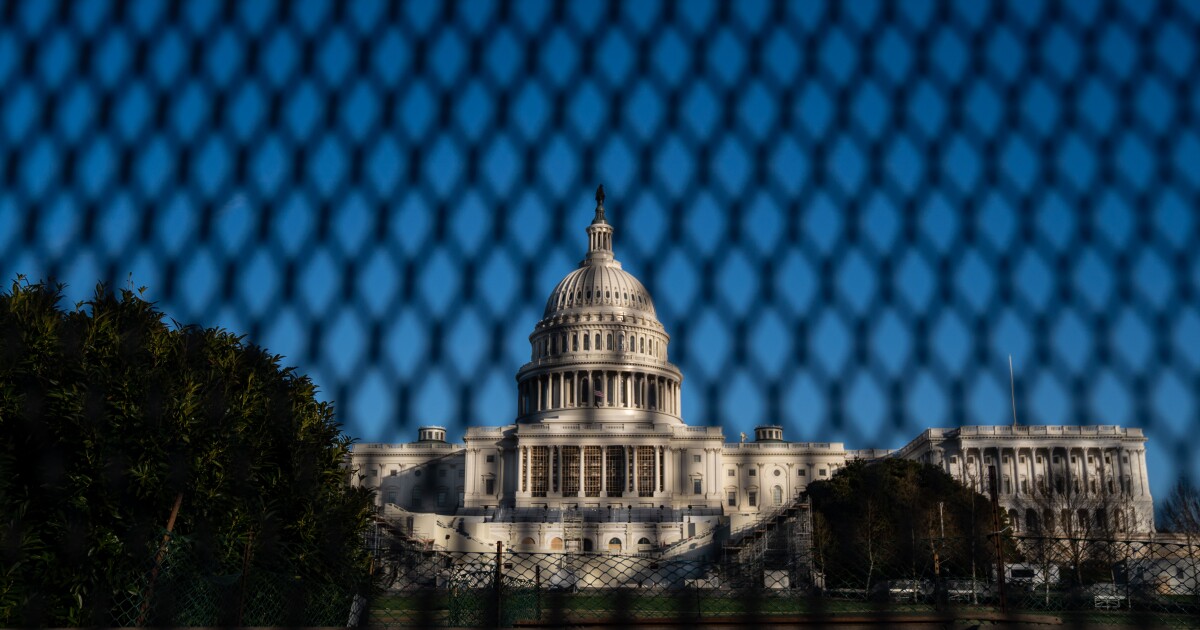 And we thought 2020 was nuts. Welcome to Coup Week, 2021. I’m Carolina A. Miranda, arts and urban design columnist at the Los Angeles Times, with the week’s essential art, architecture and insurgency news:

After the insurgency comes the cleanup.

On Wednesday, a pro-Trump mob stormed the U.S. Capitol — smashing windows, breaking through 19th century doors and pilfering historic objects, including the nameplate from House Speaker Nancy Pelosi’s office. Tear gas and pepper spray were deployed in parts of the building, including the rotunda, during skirmishes with law enforcement.

In the wake of the incursion, which featured the startling sight of extremists leaping into the Senate chamber and propping Trump flags on historical statues, government assessment teams worked through the night to catalog the destruction.

“Wednesday was a difficult day for our campus,” Architect of the Capitol J. Brett Blanton said in a written statement, describing scenes from the riot as “hard to watch.”

While the building itself remains structurally sound, architectural fixtures and other elements were damaged.

“Our initial assessment is that most of the damage on the interior and envelope of the building is limited to broken glass, broken doors and graffiti,” a representative from Blanton’s office said via email. “On the West Front, the teams identified graffiti on the building near the inaugural stands and two broken Olmsted light fixtures.

“There were also significant amounts of trash and debris. Statues, murals, historic benches and original shutters all suffered varying degrees of damage — primarily from pepper spray accretions and residue from tear gas and fire extinguishers.”

A spokesperson for the Committee on House Administration, which manages the operations of the House of Representatives, likewise reported that windows had been smashed and historic mahogany doors damaged. “These are very old doors and very heavy doors, and they were smashed or attempted to be knocked down,” he said. “Door frames are splintered.”

Seven pieces of art on the House side of the building — including a marble statue of Thomas Jefferson — had been damaged by “a corrosive gas agent” (likely tear gas or pepper spray). Also harmed were portraits of Presidents James Madison and John Quincy Adams.

Historic objects, such as Pelosi’s gavel and a lectern, the latter of which was seen being carted out of the building by a rioter in an image that went viral, were ultimately recovered. But the speaker’s office suffered other damage, including the destruction of a 19th century mirror that belonged to the federal government and many personal items, including a statue that had been given to Pelosi by the Dalai Lama.

More extensive assessments will need to occur before conservators can begin repairing the damage.

In recent months, staff members at the Architect of the Capitol have not only been laboring under the stress of COVID-19 protocols, but they’ve been preparing for the 59th presidential inauguration this month. (The office oversees the construction of the scaffolding and other architectural elements for the inauguration ceremony, which takes place on the Capitol steps.)

Says Blanton: “Our staff showed exemplary professionalism during such a stressful time.”

More on the Capitol

The extremist riot at the U.S. Capitol led to talk online about the sullying of such an important “symbol of democracy.” But as I note in a story about the building’s architectural and design roots, this important symbol has a troubled history: “The people’s house” was built by slave labor and designed, in countless ways, to erase their presence afterward. As part of this, it’s worth noting the aesthetics of the statuary on the Capitol’s dome were partly determined by Secretary of War Jefferson Davis in the 1850s — the same man who would later lead the Confederacy.

More interesting facts: there is a statue to Davis in the Capitol’s National Statuary Hall.

Sarah Begley writes on how the art in the Capitol served as a tableau for white supremacy.

Barbara A. Wolanin, a former curator who helped care for the Capitol’s art collection for more than 30 years, told the New York Times that Wednesday’s crowd “had no respect” for the objects on view. “That’s what’s really scary.”

John King, architecture critic for the San Francisco Chronicle, revisits the executive order signed by President Trump last month, which established Neoclassical architecture as the preferred style for federal buildings. The order says this style of architecture is meant to “encourage civic virtue.” But as King notes, the Neoclassical design did nothing to stop the “horde of hateful and belligerent Trump supporters who … occupied the building at will.”

Enjoying this newsletter? Consider subscribing to the Los Angeles Times

Your support helps us deliver the news that matters most. Become a subscriber.

L.A. Times television critic Lorraine Ali examines how the images of the riot reflected a failed state — our own: “We, as a nation, are not immune to the crises in which we are so often intervening overseas, parachuting in to save the day — and frequently mucking things up further by trying.”

In an essay on what the day meant for the Republican Party, urban theorist Mike Davis described the day’s visuals as “pure Buñuel and Dalí.”

Lastly, our photo editors gathered some of the most striking images from the day.

Makeda Easter reports on a painting that re-creates the cruel killing of George Floyd in Minneapolis — now rendered billboard size in West Hollywood. The billboard is part of an effort by the George Floyd Justice Billboard Committee, which aims to keep the reasons for Floyd’s death in the public consciousness — but which has struggled with billboard companies that have refused to show the work, including one company in Minneapolis. “We definitely don’t want it to be forgotten,” says committee chairwoman Corinne Basabe, “and we definitely want it to be taken the right way and respectfully.”

The 2019 documentary “My Rembrandt” has landed on streaming services and art critic Christopher Knight had a look. Directed by Oeke Hoogendijk, the film focuses on collectors, dealers, historians, auctioneers and government officials preoccupied with the work of the 17th century Dutch master Rembrandt Harmenszoon van Rijn. “One lesson of the film,” he writes, “… is that to love an artist’s work is to possess it, whether physically, intellectually, emotionally or any combination thereof — including perhaps corruptly.”

If you are seeking some more online art viewing, Maximilíano Durón and Alex Greenberger over at ARTnews round up the 10 best art docs of 2020.

It started with a post on TikTok: Users spent months posting videos of original songs inspired by Pixar’s animated film “Ratatouille.” This inspired a Broadway production to create a real-deal show (well, a real-deal virtual show) drawn from this fan art, which also included choreography, costumes and Playbill cover art. The Times’ Ashley Lee tuned into the show and notes how it upends industry paradigms: “Thanks to the democratic nature of social media, these talented, mostly Gen Z songwriters from all over the world have bypassed the industry’s institutions and gatekeepers to get their work heard and now professionally produced.”

Plus, Lee chatted with actor Wayne Brady about playing the role of Django in this production. “I’m learning that social media has become a marketplace for creatives,” he says. “For every bad video of a bad impersonator who thinks they’re really funny, there’s a talented person just trying to be seen and find a way in.”

Matt Cooper rounds up 13 virtual happenings, including a free piano concert organized by CAP UCLA that will feature works by Philip Glass, Mozart, Berg and Ligeti. I think we could all use a break from the doomscrolling and a little classical music this week.

The Smithsonian is kicking off a yearong screening series devoted to films by women — including works by Zina Saro-Wiwa, Ingrid Wiegand and the venerable Joan Jonas. Screenings and related programming will be virtual, so you can catch the show from anywhere.

Marshall McKay, an Indigenous leader who helped the Yocha Dehe Wintun Nation secure economic independence and served as the first Indigenous board chair at the Autry Museum of the American West, is dead at 68.

Roland Reiss, an artist and educator with a 60-year legacy in Los Angeles — and an endowed academic chair in his name at Claremont University — has died at 91.

Kim Tschang-Yeul, an influential Korean artist known for paintings that evoked the dewy qualities of water, is dead at 91.

— L.A.’s beloved Blue Whale jazz club is shutting down because of COVID-19.
— Gagosian will shut down its San Francisco gallery outpost.
— The New York Times is reporting the San Francisco Art Institute may try to sell its famous Diego Rivera mural to shore up its finances — and that George Lucas may be the interested buyer.
— How cash-strapped museums are turning to sponsored content.
— Sculptor Edward Virginius Valentine created monuments to icons of the Confederacy. How the museum that bears his name is reckoning with his legacy.
— I really dig investigations into vernacular art, and this essay by Jasmine Sanders on the art produced by Artistic Impressions, a company known for producing works in the Black Romantic vein, is fascinating.
— Why chess sets can get so expensive. It’s the knight! (Not Christopher.)
— In case you are running low on arty face masks, Open-Editions has you covered.
— Aaron Timms has a good essay in n+1 about restaurants, COVID-19 and the arms race to be a gastronomic destination. (Not about art but offers good parallels.)

And last but not least …

The “Maybe it was ANTIFA” generator will help you blame antifa for, well, everything.