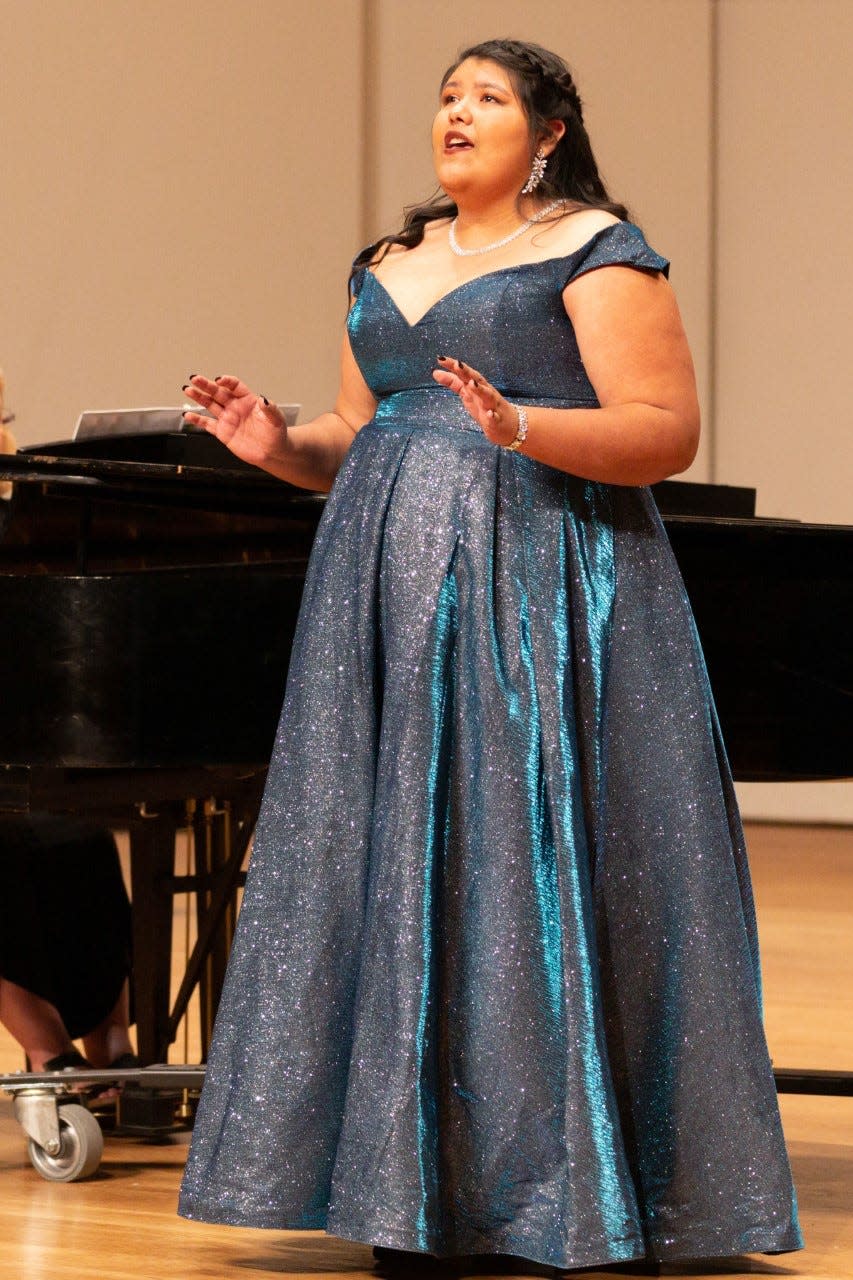 LAS CRUCES – A New Mexico State University student has the opportunity to travel to Austria this summer for a month-long intensive dive into vocal, acting, language and performance coaching for aspiring opera singers.

Priscilla Gandara is a music education major at NMSU planning to graduate in December. Though Gandara is now set on pursuing a music career, she didn’t start singing until her junior year of high school at El Paso’s Coronado High. Before that, she was on the football team.

However, Gandara’s football-playing days came to an end when she sustained a third concussion.

“I had this meeting with my counselor to see which elective I would be in rather than football because I couldn’t be in it anymore, and I told her just to put me in whatever, that I didn’t care,” Gandara said. “She put me in choir, so it was like destiny, I guess. And then I joined choir and I loved it, I fell in love with it.”

She started singing in choir her junior year but said she didn’t really start taking music seriously until her senior year. Her teachers at the time encouraged her to participate in solo and ensemble where students perform in front of judges and get feedback on their musicianship.

Never miss a story: The Mesilla Valley is full of stories worth telling. Download the Las Cruces Sun-News app and always be in the know.

And even then, Gandara said she didn’t know she wanted to study music in college until the day she registered for classes.

“My big dream is that I get to perform … in an opera company, that’s the dream,” Gandara said.

She said the first opera she ever saw was Giacomo Puccini’s “Tosca.” A traveling company performed at the Plaza Theatre in El Paso. Witnessing the drama and flare of the performance, Gandara said she was hooked. That was what she wanted to do. She added that one day she would love to play Tosca, who dies a dramatic death.

Wanting more opera experience, Gandara said she asked her vocal teacher, Eike Gunnarson, for guidance. She pointed Gandara in the direction of several programs, including the Austrian American Mozart Academy in Salzburg. But because Gandara has been taking voice lessons for only four years, compared to other students who have been training for over a decade, she said she wasn’t sure how she would measure up.

“I was expecting hopefully to get in, but only to like be the background character or something. But I got in and I got a whole role,” she said.

Students from across the country will be traveling to Austria in July where they will take part in voice, acting and German lessons as well as master classes and coaching from professionals. At the end on their month-long stay, the group will perform Wolfgang Amadeus Mozart’s “Le Nozze di Figaro,” or “The Marriage of Figaro.”

More: Music series features a concert a week in a Las Cruces park. Check out who’s on the schedule.

Gandara will be taking on the role of Marcellina, a woman determined to marry Figaro.

The program along with travel expenses, housing and other living expenses will cost around $6,000. Gandara has been working and teaching private voice lessons to help with the costs, but she still needs help. She set up a GoFundMe page for donations. Her church, St Paul’s United Methodist Church, held a reception for her and donated several thousand dollars to her page.

Gandara said she will continue working and rehearsing throughout the summer, preparing for her trip. The flight to Europe will be her first time on a plane and performing in “The Marriage of Figaro” will be her first full opera performance. There are a lot of firsts coming her way, but Gandara said she is excited to mingle with fellow musicians and take in the full experience.

Her family is excited for her too. Many of her extended family hadn’t heard her sing until her senior recital performance at NMSU’s Atkinson Recital Hall recently. She performed 14 pieces, including a duet and ensemble piece.

“I wish I could take them with me, put them in my pocket,” she said.

People can donate money toward Gandara’s trip online at https://www.gofundme.com/f/austrian-opera-summer-trip-2022.

Leah Romero is the trending reporter at the Las Cruces Sun-News and can be reached at 575-418-3442, [email protected] or @rromero_leah on Twitter. The digital artist known as Beeple: ‘I’m just trying to expand people’s idea of what art is’

Art on the Square returns to Belleville, IL this weekend